I once again welcome Daniel Ottalini back to my blog with the release of the newest book in his Steam Empire Chronicles! 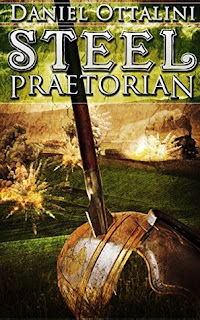 Emperor Hadrian Appius is dead, and the man responsible is his own brother. Unable to prevent the assassination in IRON TRIBUNE, Senatora Octavia and her allies flee Rome, leaving the smoldering capital behind them, determined to fight on against their rebellious countrymen. In the east, rightful heir-to-the-throne Constantine Appius faces disaster at every turn, his forces stretched thin against invading Mongols and rebel Romans alike. With the help of new friends and old, a desperate plan is formed. But will it be enough to save the Empire and the throne in STEEL PRAETORIAN?

Steel Praetorian is the fourth book in the Steam Empire Chronicles a Roman Steampunk adventure series. Tell us a little about the series and the world for new readers.

In short, The Steam Empire Chronicles is a series all about the ‘what if’ factor of the Roman Empire - What if it had survived? What would it be like? Imagine the world without the Dark Ages? Without the Crusades? I explore this possibility in the series, starting with Brass Legionnaire. The series starts small, but quickly branches out with new characters, new plot lines, and new locales in subsequent novels!

What is the best part about writing an alternate historical story and what are some challenges?

Oh wow. I love reading about Alternate History, and writing about it is nearly as much fun. It’s fun because you can take so many real elements and tweak them just so, creating something entirely new.

Biggest challenge? Making that something new also something believable. The best alternate history writers are perfect at doing this. Your tweaks don’t need to be massive to have massive changes to history.

Who is your favorite character to write, and who is one that gives you problems?

Hmmm. My favorite character to write is actually Corbus, because his motives start very basic and pure (if not good intentioned) but get complicated very quickly. His progression from basic villain to arch villain to someone inhabiting a very dark grey zone between the other characters has been incredibly interesting to watch!

Right now, the hardest character to write is actually Julius, because while I have a great track of where he’s going/planning, it’s hard to make it fit into the flow of the story. Julius was, and still is, the main ‘introducer’ to the world. He’s the one who explains crazy things to us. In some way, I feel guilty that he’s gotten so complex it’s hard to write from his point of view!

What are you working on next?

Right now, I’m working on Laurel Emperor, the final novel in the Steam Empire Chronicles. I’m roughly 35 thousand words into the novel, so I’m a little over a third of the way through the book. I’ve been brainstorming some ideas to fill in some voids in the series using novellas. Eventually I’d love to create an anthology and get it into print!

What was your favorite book that you read this year?

Hmmm too many! If required to narrow it down, I’d say that I really enjoyed a book called the Sword of Summer, by Rick Riordan of Percy Jackson fame. Riordan writes great books, perfect for a lazy afternoon.

What book or movie release are you most looking forward to next year?

Was looking forward to Star Wars (which is this December, not next year) but I’m actually really looking forward to seeing the movie Dunkirk. Not only for it’s alternate history opportunities (imagine how the war would have gone if the Germans hadn’t stopped their tanks!) but also because all those scenes provide such great inspiration for writing.

What would you say to people who haven’t yet started the Steam Empire Chronicles to get them to try it out?

I mean, Romans with Airships, what more could you want?

But seriously, the novels grow in complexity, excitement, and intensity as we hurtle towards the last novel. My latest book, Steel Praetorian, was just released. You can grab Brass Legionnaire for only $1.99 in ebook form, so why not give it a try!

Check out more info on the Steam Empire books from Daniel’s Blog danielottalini.com and follow him on his facebook/twitter accounts

And Here's the links to Brass Legionnaire to start off the series!