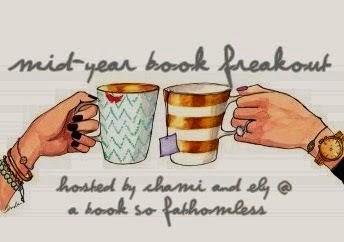 Hosted by A Book So Fathomless

I got challenged to do this by my friend and fellow blogger Mara at The Reading Hedgehog. And I thought it looked like fun and a good idea so here is my post, kind of a wrap up of the entire year and not just my summer reads.

1- Best book you've read so far in 2014
Okay, this is tough. I've read lots of good books, but only a few really awesome, epic books. As far as books that came out this year, definitely Jackaby by William Ritter. But as follow up books that I just read this year, I Hunt Killers by Barry Lyga and Vicious by Victoria Schwab were close seconds.

2- Best sequel you've read so far in 2014
Probably The Shadow Throne (Ascendence Trilogy #3) by Jennifer A. Neilson was the best sequel book I read so far.

3-New release you haven't read yet, but want to
Ooh, soo many! I have heard many good things about The Queen of the Tearling by Erika Johansen and really want to read that. I also really want to read Midnight Thief by Livia Blackburne. Looks like a good adventure fantasy novel.

4- Most anticipated release for the second half of the year
Blue Lily, Lily Blue by Maggie Stiefvater (Raven Boys III) I'm both anticipating this one and scared to death by it. I almost wonder if I just want to have it so I can see where it goes.

5- Biggest disappointment
I don't know if I had any books that were a HUGE disappointment. Half Bad by Sally Green wasn't nearly as awesome as it sounded nor was Crusher by Niall Leonard, but it didn't keep me up at night.

6- Biggest surprise
This would probably be Spookygirl by Jill Baguchinsky. This was one of those books that could go either way, but ended up being good. Not one of the best books ever, but very enjoyable.

7- New author (debut or new to you)
I'm going to do both. For a debut, William Ritter, author of Jackaby definitely and for new to me, Rob Thurman, author of the Cal Leandros series.

8- Newest fictional crush
Ummm....wow, that's a hard one. Maybe Niko from the Cal Leandros series. Off the top of my head.

10- Book that made you cry
I think I've spent most of this year so far crying over TV series instead of books, but I did cry reading The Shadow Throne by Jennifer A. Neilson. It tore me up.

11- Book that made you happy
The Boundless by Kenneth Oppel. Classic adventure novel, and I always adore his books. Makes me feel like a kid :-)

12- Favorite book to film adaption you have seen this year
As crazy as this sounds, I have not seen a book movie this year. I have actually only gone to see three movies this year so far, and none of them were book adaptions. I can probably say with conviction that my favorite will be the third Hobbit movie when it comes out.

13- Favorite review you have written this year
This might sound bad, but my favorite review to write this year was the one I wrote for The Friday Society which I gave one star to because I got to say what I thought about it and use lots of gifs. It's here if you want to read it: https://www.goodreads.com/review/show/446704041?book_show_action=false

14- Most beautiful book you have bought this year or received
The Barns & Noble Classics edition of Grimm's Fairy Tales It is sooo pretty :-)

I'm not going to tag anyone for this, but I would like to thank Mara again for tagging me, because I enjoyed it a lot! Hope everyone has a good September! I'll be back before long with...something :P