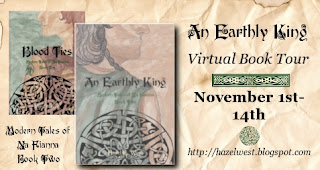 To kick off the Earthly King Blog Tour, we have a character interview with High King Eamon O'Brian! (Special thanks to Abigail & various siblings for coming up with the questions for me)

If not a king, what profession or interests would you pursue?

Well, I have always loved books, so maybe I would like to be a librarian. It's not something I've really thought of before, since growing up as a prince never really gave me many options for a change in career.

Which other king or queen do you like best?

Well, certainly not Proinsias (Paunchias). Most of the other rulers aren't that bad though. Queen Niamh isn't too bad though, and at least she usually seems to see things rationally.


Would you rather be buried in the ground, cremated or buried at sea?

Um…that's an…interesting question. Hopefully not prophetic. I will be buried in the family crypt with the rest of the O'Brians.

What is your least favorite task as king?

Council meetings. Those are horrible and long and annoying.

What is your favorite season and why?

Well, after certain events, fall is no longer my favorite season (though you'll have to read the book for that!) I think spring is a nice season. It starts to get warmer and the flowers in my mother's garden bloom.

What is your favorite animal?

I am rather fond of Irish wolfhounds. I grew up with them around the Hall.

If you could, what would you change in Ireland?

Well, as of now, since we've made a few peace treaties, it's been pretty much changed for the better. Of course, I would love to insure that war never happened again. I think I would also like there to be less council meetings.

Are you artistic or scientific?

Hm, I'm not sure I'm actually either. I'm not really scientific, nor am I really artistic. I'm a bit of a scholar, more of a historian and whatnot.

What is your pet peeve?

Just one? Council meetings. The council telling me what to do when it doesn't even make sense. Many things.

What was your favorite thing to do as a child?

Well, Killian and I got up to all kinds of stuff at Tara Hall when we were kids, like hiding in the kitchen cabinets and scaring the cooks. But The best times I had were when Killian, Aedan and I went out into the woods and pretended to be rebels and warriors.

What is your favorite book?

My favorite book is a collection of stories about Cu Chuilain that my father read to me as a child.

Don't forget that today is the day the first day you can download Blood Ties free from Amazon Kindle! So definitely go and download it if you haven't read the series yet. Then if you like it, you can get An Earthly King! :-)

Buy your copies of An Earthly King here:

It's time for the second book in the Modern Tales of Na Fianna series to make its appearance! Since the book is featured around All Hallows, I thought Halloween season would be the perfect time to bring it out.

Join up for the Earthly King blog tour, to read excerpt and interviews I did with bloggers about the book. Also, definitely enter the giveaway, as you will be able to win a signed paperback copy of BOTH Blood Ties and An Earthly King and get some swag as well (buttons and bookmarks!)

Also, I'm running a deal on Kindle from November 1st-5th so you can get an e-copy of Blood Ties free, so you can have a chance to read it before you take a crack at Book Two! Check it out here

Don't forget to enter the giveaway!

a Rafflecopter giveaway
Posted by Hazel West at 10:36 PM 14 comments:

Hey everyone! I made this video to share some of my favorite Halloween reads with you. Let me know what your favorite creepy reads are!

Posted by Hazel West at 9:22 PM No comments:

Here's the September Wrap Up and Book Haul :)

Posted by Hazel West at 9:29 PM No comments:

August Wrap Up and Book Haul

This is super late, but here it is, finally!