Hey guys! So, I'm super excited for my NaNo project this year since this is one I've wanted to do for a long time.

This year I'm going to be working on a modern day retelling of the Hades and Persephone story. I can't wait to get into this story and share it with everyone when it's finished. This is one of my favorite mythological stories ever and I have never found a good retelling of it so I decided to write my own. On top of that, it's super fun to get to play around with Greek mythology, since there are a lot of things I've always wanted to do with the characters and I hope everyone enjoys the versions of them in this story as much as I'm sure to enjoy writing them.

Check out my Pintrest board to get a little sneak peek of what this story might be like!

And here's a little teaser excerpt to kick off the month:

Flower of the Underworld

Posted by Hazel West at 4:02 AM No comments:

Email ThisBlogThis!Share to TwitterShare to FacebookShare to Pinterest
Labels: 2018, Flower of the Underworld, my stories, mythology, NaNoWriMo, retellings

Hey guys! I'm excited to once again help out a friend of mine, Claire M. Banschbach, with the cover reveal for her new book The Wolf Prince! I had the pleasure of beta reading this one and cannot wait for the rest of you to get the chance to read it!

Without further ado, here it is!!! Isn't it gorgeous??? 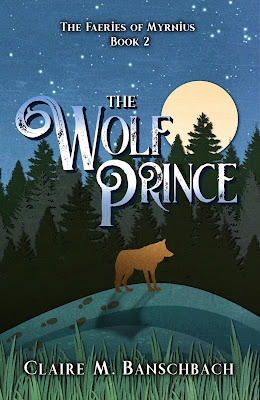 The Wolf Prince Will be out on August 21st, so make sure you grab yourself a copy then! In the meantime, check out this synopsis:

One prince. Two brothers. Three companions to prevent a sorcerer from destroying the faeries.

Prince Killian has always known he’s different. It’d be impossible to miss the whispers of an age-old family curse, to ignore the call of the wolves on his birthnight and the barely-veiled hostility from his people. His family insists there’s no curse. If only they were right.
When an evil sorcerer bent on destroying the faeries turns Killian into a wolf to use in his diabolical spell, Killian must rely on the help of his playboy brother, Lars, and Rose, an aspiring ranger they meet on the road, to escape the sorcerer and find the faeries who can turn him human again.
There’s only one problem. Faeries haven’t been seen in over 50 years.
Together Killian and his companions must overcome their differences and prejudices to defeat malevolent creatures along the road, evade the sorcerer and his minions, and find the faeries before the sorcerer can kill them all.

Don't forget to add this book to your Goodreads TBR HERE

Claire M. Banschbach is a native West Texan. She discovered a deep and abiding love for fantasy and science fiction at a young age, prompting her to begin exploring worlds armed only with an overactive imagination and a pen. She's an overall dork, pizza addict, and fangirl. She enjoys meshing stories of family and faith with healthy doses of action and adventure. She talks to fictional characters more than she should while trying to find time for all their stories.
She currently resides in Arlington, TX where she works as a Pediatric Physical Therapist.

Claire is offering a giveaway for an ARC copy of Wolf Prince! All you have to do to enter is share a post on any of her social media, Twitter/Facebook/Instargam (listed above). Just make sure you tag her in them so that she will be able to see them.