So it's that time of year again--caffeination, long hours, and frantic writing to get to your 50,000: NaNoWriMo!

So I wanted to share a little about my project for this year: This is actually a project I've been planning for a couple years now and am super excited to finally get to share it with everyone. 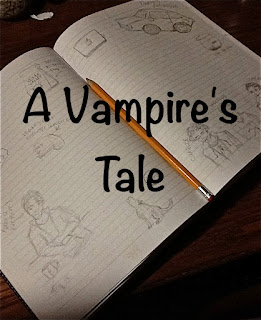 A Vampires Tale is going to be an eventual serial web series in episodic form about a modern day Vampire named Jared Everett as he goes about his life, just trying to make it in today's society.

Jared Everett is just a vampire living in the 21st century and trying to make his way in a world where the humans aren't even as human as the monsters that walk among them. Along with his roommates--A nerdy werewolf, the ghost attached to the apartment trying to finish his thesis, and a demon who's a real lady's man-- and a spunky little girl who just wants to live a real childhood, Jared narrates this satire on society with a good dose of dark humor.

My name is Jared Everett and I am a vampire.

I guess I’ll start with saying that this is a project I’ve thought about for a while, writing down my, I guess you could almost call it autobiography, but it’s more like a journal really, of some of my trials living as a vampire in 21st century America. It’s really not glamorous like they show in all these stupid books and movies that everyone loves so much. It’s not even about feuding with werewolves and running from hunters. My best friend and roommate is a werewolf and I have never seen a legit hunter, and no fake ones outside of Halloween or nerdy horror conventions. We live nine to five lives just like the average human and try to stay under the radar as much as possible. Pretty much just normal. No glamour, mainly just boredom.

Let’s get a few things straight first because I’m sure you have some questions. First off, no, I do not sparkle like a disco ball, nor do I have cute hair and good fashion sense. My hair is always messy and I wear worn jeans and boots and usually a button-up and t-shirt or plain sweater. My skin is pale, yeah, put it doesn’t look like I covered myself in my six-year-old sister’s body glitter.

Fangs? They pop up when I need them, but I can smile in public without scaring old ladies and children.

Sunlight? I burn easily, I wear sunglasses when I’m outside and long sleeves since I don’t get hot or cold, kind of a perk of being undead, or whatever the kids are calling it these days. But no, I don’t burn to a crisp. SPF 100 is always a good call if nothing else.

Experienced? (aka ancient creeper in an 18-year-old’s body who still goes after girls his death-age) Nope, not unless you want to call the 90s ancient. I’m a baby vamp, only turned about ten years ago, still stuck in a 23-year old body, but that’s cool right? At least I beat acne before it happened.
Garlic? Delicious on pizza; only keeps me away if you breathe in my face.

Wooden stakes? Yes, those do actually work, as well as a machete to the neck. It’s a two-step process but don’t tell anyone that. Stoker was pretty darn accurate.

Coffin? No one sleeps in coffins but weird emo freaks. Dracula probably just liked to feel cozy. Or maybe he was just a Victorian goth.

Grave dirt? I don’t know about that one. I wasn’t buried, I never died—just un-died or whatever.
And for the question everyone probably wants to know: Do I drink blood? Yep, I am a vampire, that sort of defines my kind, but that doesn’t mean I also don’t enjoy a bacon cheeseburger or a slice of pie on occasion either. But, I have tried to go vegan.

And by vegan, I mean, I only eat vegans.

What else do you think would possess me to work at a vegan café?

Okay, so it might seem a little callous, but I have to eat too, and they are healthier for vampires even if they do taste like wheatgrass and soy. Studies (by obscure vampire scientists that only a few of us know about) have shown that by ‘going vegan’ as a vamp, you can sort of wean yourself off blood, not need it as much. As long as you supplement it with lots of red meat, which I was not at all unhappy about. Besides, I found a certain irony to it. They didn’t like to eat meat, yet I ate them. Joke’s on them. I mean, in reality, grass eaters are at the bottom of the food chain, right? If you don’t eat meat, you’re practically asking for it.

Unfortunately, no one in the universe could understand what I have to go through just to get a meal. Another reason I decided to write this down. I hope to enlighten the common reader about the underground supernatural world that exists that isn’t actually so underground after all, and isn’t just out to eat you or cause problems. Unless you’re a vegan, of course. We typically, just try to live lives like normal people.
~~~~~

If you want to be my Buddy on the NaNo site, you can find my profile HERE