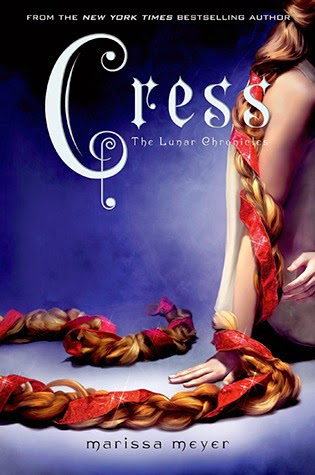 Title/Author: Cress (The Lunar Chronicles #3) by Marissa Meyer
Genre: YA, Sci-Fi, fairy tale retelling
Rating: 4/5 stars
Synopsis: In this third book in the Lunar Chronicles, Cinder and Captain Thorne are fugitives on the run, now with Scarlet and Wolf in tow. Together, they’re plotting to overthrow Queen Levana and her army.

Their best hope lies with Cress, a girl imprisoned on a satellite since childhood who's only ever had her netscreens as company. All that screen time has made Cress an excellent hacker. Unfortunately, she’s just received orders from Levana to track down Cinder and her handsome accomplice.

When a daring rescue of Cress goes awry, the group is separated. Cress finally has her freedom, but it comes at a high price. Meanwhile, Queen Levana will let nothing prevent her marriage to Emperor Kai. Cress, Scarlet, and Cinder may not have signed up to save the world, but they may be the only hope the world has

Thoughts on the Overall Book: I've really enjoyed this series from the beginning, and this book was no exception. I continue to love the cast of characters and the new additions and this one particularly had a very classic adventure flair to it.

Cover--Yea or Nay: I love the covers for this series, so pretty yet simple.

Characters: I still loved all the characters I liked previously, Cinder is still awesome, Iko is adorable (definitely my favorite android character ever) and though Scarlet and Wolf weren't in this one quite as much, I still really love them too. Thorne is fast becoming my favorite character, probably. I can't resist loving the characters who are rogues yet still good men. I also really loved Cress, I felt she was a good edition to the group. Since Cinder and Scarlet are two pretty prominent heroines, I liked how Cress is more shy and sweet but still very skilled in hacking and she's strong enough to step up to the plate when she needs to. Lavina is still evil, and Sybil was fun to hate as well. I was interested with the introduction of Winter in this one, I really have no idea what to think of her yet, but I know she's going to make an awesome character.

The Romance: Okay, yes, there is essentially insta-love between Thorne and Cress, or at least on Cress's end, but it actually works here, because it's more fanciful than anything, and she's kind of naive and hasn't had a lot of human interaction. It didn't bother me. Apart from that, really not much romance to speak of. This one was mostly action packed. But I did really end up enjoying Thorne and Cress's relationship and I think it's cute. (view spoiler)

Writing Style: Same as the other books. Love the world building, and how the story is evenly balanced between characters and their development and storylines and the plotlines. It makes for an engaging read, and even though the book is long, it doesn't seem to drag.

Accuracy/ Believability: Despite being sci-fi, I actually to think that the situations of the story are pretty accurate to how they would really happen. It's a pretty well thought out plot for a sci-fi novel.

Problems/What bothered me: Really didn't have any problems, I enjoyed the book.

Conclusion: 4 of 5 stars. Really enjoyed this one, and am very much looking forward to the next one! Can't wait!

Recommended Audience: Readers of the first two, obviously. I don't read a lot of sci-fi, so I don't know a lot of recs, but if you love fairy tale retellings and want something different, these work. Girl or guy read ages 16 and up

(Read review with spoilers on Goodreads)
Posted by Hazel West at 9:29 PM 2 comments:

Happy Spring everyone! I hope all you northern folks are either getting spring or will soon :-) We've already had 80s here in Florida, and you can have it for all I care. The moment I put my sweaters away, I die a little inside.

But in honor of spring, I am going to clear a little of my shelf space and give away some of my own books which I have several copies laying around of so I can jump start someone's spring reading list! 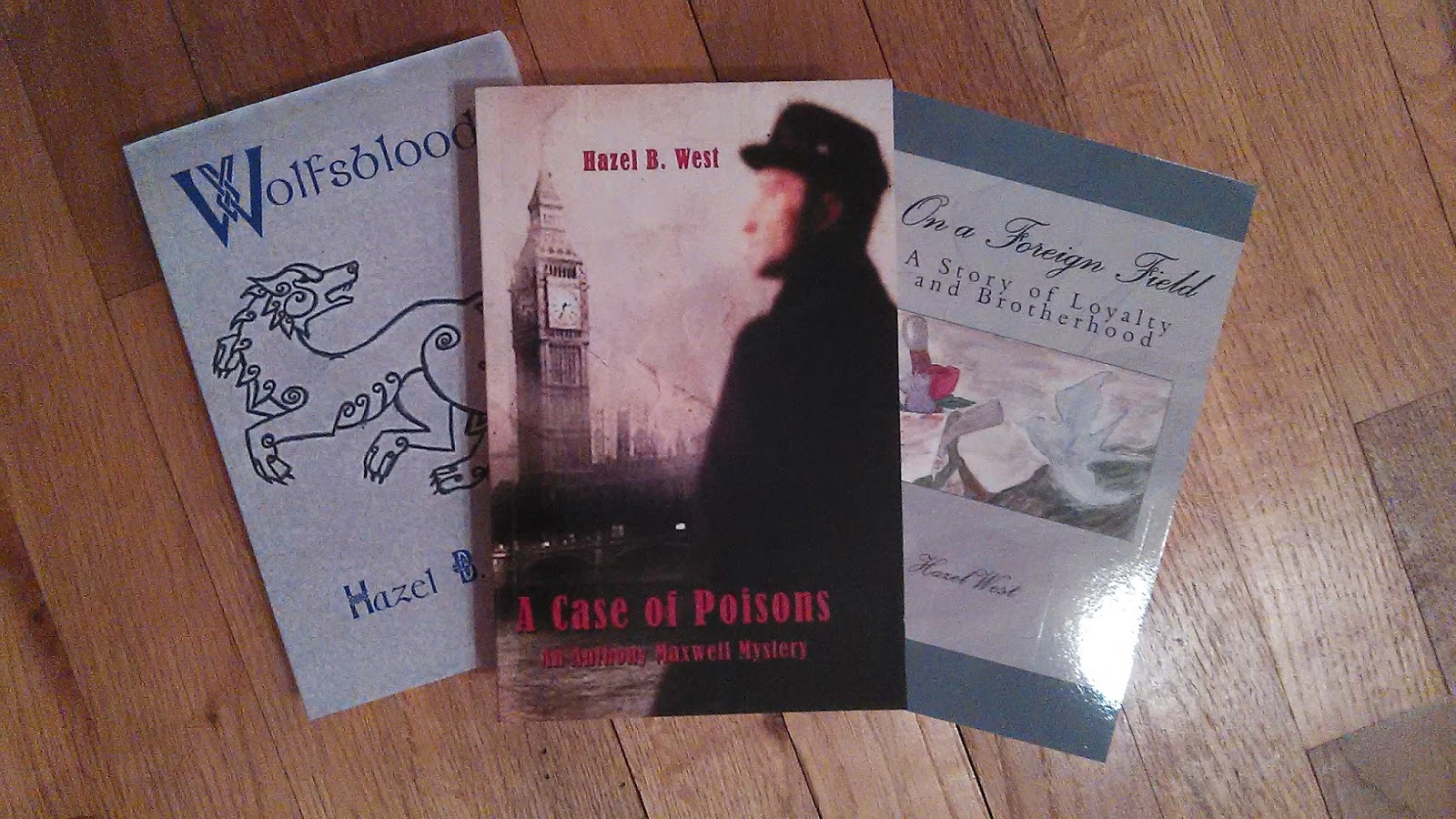 I will be giving away a copy of Wolfsblood my latest novel a historical paranormal novel, On a Foreign Field my historical novel about William Wallace, and A Case of Poisons my steampunk mystery. So if you like Roman werewolves, Scottish rebels and steampunk and murders by poison, enter the giveaway! All copies will be signed and personalized and I'll throw some extra bookmarks and goodies in as well. You have until next Saturday (the 28th) to enter. Let your friends know too!


a Rafflecopter giveaway
Posted by Hazel West at 10:11 PM 4 comments:

Email ThisBlogThis!Share to TwitterShare to FacebookShare to Pinterest
Labels: A Case of Poisons, giveaways, my books, On a Foreign Field, Spring, Wolfsblood

Wear your green and listen to Irish music, try some traditional food. I hope everyone has a grand day :-)

Last year, I introduced what was then my new project Blood Ties a novel set in modern Ireland, but with an ancient and mythical twist. I'm expecting to publish it sometime this summer, but until then, I wanted to give you another teaser to wet your taste buds, so here's an excerpt in honor of St. Patrick's Day. 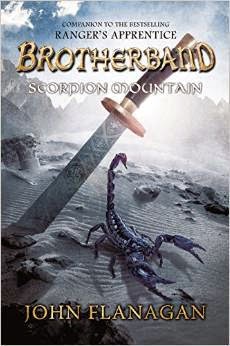 Hal, his Brotherband crew, and the Ranger Gilan have freed the twelve Araluens sold into slavery. Returning to Araluen, Gilan is given a new mission by King Duncan: protect his daughter’s life. Princess Cassandra has survived one attempt on her life already, and now whispers of a second attempt have reached the kingdom. A deadly sect known as the Scorpion Cult is thought to be behind the assassination threat.

Not waiting to see if the knife will strike true, the Brotherband again team up with Gilan to track down the would-be killers.

In this fifth book in the Brotherband Chronicles, old friends reemerge to take on new enemies as the worlds of Ranger’s Apprentice and Brotherband join forces in battle!

Thoughts on the Overall Book: I am still enjoying this series, I'm a huge John Flanagan fan, so I will always read and enjoy his books, but I had hoped this one would exceed the last one, and it didn't really, so I was a bit disappointed, I'll admit.

Cover--Yea or Nay: I'm undecided whether I like the new covers or not. I think I liked the old ones better, but there's nothing wrong with it either. I do like the knotwork on the spines.

Characters: Pretty much, my opinion of all the characters has not changed. I still like Hal, I'm still indifferent about Lydia, I love seeing Gilan again, he was always a favorite character; Thorn is still awesome, I can't help but like him. For the little bit Cassandra/Evanlyn was in this book she still managed to annoy me. I was mostly disappointed with the villains in this book. I always felt that the Ranger's Apprentice series had some awesome villains, even if they were cliche on occasion (the books kind of are, but I love that, classic adventure) but in the Brotherband books, apart from the baddie in the first three (forgot his name) these last two have just been disappointing. Especially since we went through three or four of them in this one. Baddies are important, not to be taken lightly.

The Romance: Still nothing, thankfully, I'm still dreading a love triangle between Lydia, Hal and Stig, but so far nothing.

Writing Style: I'm going to have to be honest here, there's nothing really wrong with John Flanagan's writing style in these books, but I just can't help but feel they're a little less shall we say polished as the first three and especially the Ranger books. I just don't think they have the same quality as the Ranger series, and that makes me sad. I think he needs to try something new. These last two books were huge and yet, nothing really seems to happen, and I never feel like the characters are in danger anymore. Like the Ranger books would actually have me on the edge of my seat; I haven't felt like that reading the last couple Brotherband books. Even The Royal Ranger despite the fact I didn't care overmuch for Maddie had the quality of writing and story crafting that the other books did, but these just don't. In my opinion. I still enjoy these books, but not in the same way I devoured the Ranger series.

Accuracy/ Believability: Not applicable really. Except their escapes are actually getting dull. I would love to see more angst and, yes, if it doesn't sound too mean, wounds and whump. A little more danger would be much appreciated.

Problems/What bothered me: Apart from the things already mentioned, nothing else.

Conclusion: 3 stars. A fun read, though I think it could have been shorter, as it dragged with the same old stuff all the other Brotherband books had. Fun to pass the time though.

Recommended Audience: Girl or guy read 12 and up, fans of John Flanagan. But Start with Ranger Apprentice series if you haven't read any of his yet.
Posted by Hazel West at 5:15 PM 3 comments: