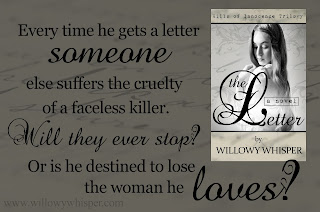 I'm happy to welcome back Willowy Whisper on blog tour with her new book "The Letter" the second book in The Hills of Innocence Trilogy. 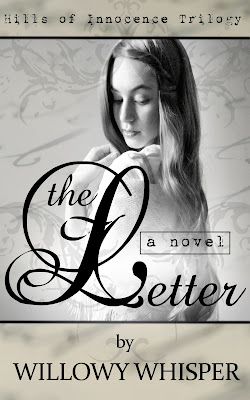 SYNOPSIS
First it was just a letter, maybe a joke, a coincidence. Now it was more than that. Now it was a living nightmare, threatening everyone he loved, pulling his greatest fear into a reality . . .
As the letters keep coming, Brock Sumner watches his world shatter at his feet. Building a wall around his heart seemed like the only answer. Is there any other way to protect the woman he loves?
A drunk, with no incentive to change; a runaway, with a price on his back; a young child, afraid in the dark . . .
Will the letters, perhaps, pull their lives together? Or will the killer find a way to destroy them all?

ABOUT THE AUTHOR
Willowy Whisper is a seventeen-year-old author. Living in the quiet hills of West Virginia, Willow writes novels, short stories, and blog posts. She is a born-again believer in Jesus Christ, and an incurable romantic.


What was your inspiration for writing “The Letter”?

I can't say that I really had something specific inspire me. It was more of a case of “I'm gonna write a second book to my series”. So I did.

Do you have any favorite writing music or specific soundtracks for your books?

Well...no. But if any music would be amazing to go with my book, it would probably be The Last of the Mohicans (soundtrack from the movie).

What is your writing process like? Are you a “planner” or a “pantster”?

When I first started writing, I went with more of a think-of-the-next-thing-as-you-write attitude—and it worked. For a while. My second novel, however, never went anywhere (I never published it or let anyone read it besides my editor) because I didn't have a well-planned plot. Since then, before each novel I make myself a fairly detailed outline—and for the most part, I stick with it. I've found that it works the best for me (although with short stories, I usually go spontaneous).

Which of your characters would you most like to be friends with?

If you're talking about just “friends”, Lacey would probably get along splendidly with her author. :) But I'd like to marry Brock Sumner. Too bad I made him up. :)

Which character would you not want to know in real life?

For the sake of spoilers, I won't mention any names—but the sender of the letters would definitely be a person I would not want to know.

What is a book you would recommend to anyone?

The Hawk and the Jewel (by Lori Wick) is probably the best, most romantic book I have ever read, and if I were ever to recommend a book to someone, that would probably be it.

Anything in the works now?

Yes (always pretty much something in the works)! Book 3 of the Hills of Innocence Trilogy is in the beginning stages...in other words, the “outline” is all that's been established. I am also writing a short story.


Add it to your shelves on Goodreads!
Buy the Book on Amazon!
Willowy Whisper's Blog: http://willowywhisper.com
Posted by Hazel West at 1:58 AM 2 comments:

Sorry this is so late, I just haven't had a chance to get anything up yet this month!