Well, it's cover reveal time! I'm excited to finally get to share the cover for the second book in the Modern Tales of Na Fianna series: An Earthly King. (To be released Oct. 31st) 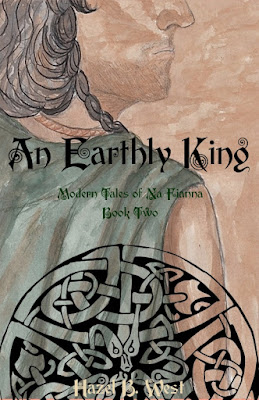 Six months after Ciran defeated King Lorcan and instigated a peace treat between the High Court of Ireland and the Goblin realm, things have been slowly getting back to normal in the kingdoms. That is, until the council decides that it's time for High King Eamon to find a queen.

On top of that, there seem to be stirrings of rebellion in the Faelands, as not all the Fair Folk like the High Court's treaty with the Goblins. So it's up to Ciran Mac Cool and his company to stop the rebellion before it goes too far, while also trying to keep Eamon safe from potential assassins. And with all the prospective brides rubbing elbows with the High King, that's said than done.

With the help of their friends and a spunky agent from the Bureau of Protection Against Fair Folk, Ciran's Company attempts to stop the faery plots before Ireland is thrown into all out war. Again.

An Earthly King is another action packed book in this celtic urban fantasy series with lots of friendship, humor, angst, and even traces of the Ballad of Tam Lin.


And now for a very special exclusive excerpt from An Earthly King!


Lanagan’s pub had long been the place Na Fianna gathered at the end of the day, or whenever there was a cause to celebrate, and we had done nothing to change that tradition. I had decided that in light of the coming festivities, I would take my company there to treat them and drink a health to our fine High King.

“I can’t believe Eamon’s actually going to be choosing a wife within a couple weeks,” Tierney, my best friend, said, spinning his mug around idly and watching the condensation circles make patterns on the bar top. “I mean, how does the council expect him to find anyone worthy of being his queen, when all we have to deal with are the few princesses, and semi-royals that the other kingdoms have to offer.”

“Well, I would have given him my sister, but Killian stole her,” I told him with a grin, but I did feel bad for Eamon. I knew the issue had been a sore point for him for a while, and I thought it was idiotic that the council pushed it so hard. I know they just wanted to make sure Eamon had an heir in case something happened to him, but talk about putting the pressure on.

“Come on, I’m sure there’s some girls who are worth while among them,” Deaglan said with a grin, flicking a peanut shell at Tierney’s head.

“Not all of us are as optimistic when it comes to the fairer sex as a MacDiarmid,” I told him. “Nor as unchoosy.”

“Oh-ho!” Deaglan grinned even brighter. “And what does that say about your ancestor’s wife, eh?”

“Don’t bring the feud into this, boys,” Caitlin said, as she sat down on my other side. She reached over me and stole the bowl of peanuts. “You just made amends, so let’s not do anything to put them back to where they were before.”

“Quite right,” I amended. “Let old feuds lie. Right now, we are toasting our High King.” I raised my glass and glanced around at my company. “To Eamon. May he find true love among the flowers of our country.”

“To Eamon!” they all cheered back and we clashed our mugs happily.

A band had set up in the corner of the pub, and began to play. Riordan, sitting further down the bar with his cup of tea and knitting, groaned and lowered his head into his hands.

“By the saints, not that song again!”

“Are you going to need some zen berserker time?” his younger brother, Keevan asked him, patting his arm.

“Shove off,” Riordan told him, knitting at the same pace as always.

“I think it’s catchy, not to mention I get a whole verse,” Keevan said with a grin, singing along to the tune as he danced on the barstool.

I shook my head. A few months back, in light of our heroic exploits while saving the captured patrol and then making a peace treaty with the Goblins, the rock band Swords and Shamrocks had decided to write a song in the old tradition about our deeds. It was horribly overwrought and embarrassing to listen to. Probably even more embarrassingly for myself, it was entitled ‘Ciran’s Company’ and seemed to be played by every cover band and every radio station in the country.

“It will pass before long,” Caitlin told me, putting a comforting hand on my shoulder. “A royal wedding will make them all forget our brave deeds.”

“If only,” I muttered. The truth was, it bothered me more than I was willing to admit. None of us had gone into the Faelands to rescue the patrol because we wanted the fame, we had gone simply to rescue our families. The peace treaty with the Goblins had been nothing more than a fortunate accident. I hated the publicity it had brought us. I had my brother back and that was all that mattered to me.

I turned around, knowing who it was even before I heard Keevan’s growl of “Casey.”

The tall, dark-haired eedjit stood behind us with his few faithful cronies, hands on his hips and legs wide like some propaganda poster to join the Royal Guards. Like us, they were out of uniform but still looked like the overbearing arses they were in their designer leather jackets and snarky expressions. Now, Deaglan was also wearing a designer leather jacket and Keevan had enough snark for all of us, but we were still not the Guards and that made all the difference.

Not to say all the Royal Guards were bad fellows. Just Sean Casey’s bunch, and those like him. There had been a long running rivalry between the Guard and Na Fianna, brought out every year in the hurling game that became more of a bare-knuckle fight ring with sticks than hurley before the end. Casey and his mates were our age, having graduated the Academy the same time we had gotten promoted into Na Fianna, so they thought they had something to prove against us. Especially since we now had a chart topping rock song to our fame, and they had nothing but attitude.

“What do you want today, Casey?” I asked boredly, hoping this wasn’t going to go anywhere but knowing how false that hope was.

“We just came to get a drink, that’s all. Drink a health to our High King,” Casey said and motioned to the bartender.

“Better drink responsibly,” Tierney told him with a smirk. “Killian will have your hide if you show up woozy tomorrow.”

“Back at you,” Casey said, before turning to me. “Big brother isn’t watching, after all. You’d best be responsible, Mac Cool.”

I gave him a tight smile. “I keep a responsible company, Casey. Do you?”

“I hope so,” Casey said, turning to wink at Caitlin. “I sure wouldn’t trust mine with such a pretty bird.”

“Oh, they know better than that, right Caitlin?” I asked her as she drew a dagger from her boot and planted it between Casey’s fingers resting on the counter without a second glance.

He smiled, but drew his hand away. “Of course.”

Keevan got up and I prayed that he wouldn’t try something. But then, this was Keevan, so I should have known better. He bumped into one of Casey’s mates.

“Oh, no, I’m so sorry,” he said in mock horror, holding up his hands. “I just wanted to know what it felt like to touch such greatness.”

The young blond man he had bumped into, smirked. “Yeah, I bet. Sorry you have no idea what that feels like.”

“Hey, Crimnal,” another of the mates said. “Nice mittens. Did your mummy knit those for you?”
Riordan’s eyes went skyward with a longsuffering sigh. I winced.

Keevan turned on the mate and dropped him with a single right hook. “It’s crochet!” he shouted at the young man on the floor. “And I made them!”

Casey’s men all circled us. The band stopped playing. People in the pub began leaving. The bartender began putting away his most valuable bottles. I sighed and stood up resignedly, cracking my knuckles.

“Mate,” I said, crouching down to talk to the man Keevan had dropped who was currently scraping himself off the floor. “Don’t ever mention the crochet. Lesson learned.”

“Okay,” Casey said with a smile as he walked over to Riordan, leaning over his shoulder. “But, Keevan, are you sure big brother didn’t make those for you? This is really nice work, Granny Crimnal.” He reached out to touch Riordan’s project only to find his hand caught in a viselike grip. He should have known better too.

“Touch it, and you will wish you were dead,” Riordan said in a low, frighteningly calm voice, not even looking at Casey.

At that moment the man Keevan had put down gained his feet and with a growl lunged forward, taking Keevan down by grabbing him around the middle. It was all over after that.

“At ‘em lads!” Casey yelled, freeing himself from Riordan, as the rest surged forward.

“Ciran’s Company!” Tierney shouted and we were all in it before another word could be said.
~~~~~

Thanks to everyone who stopped by today! Keep a lookout for more news regarding An Earthly King, I will have a trailer up hopefully by the beginning of next month. If you still haven't read Blood Ties now is your chance! Still need some convincing? Check out the Blood Ties Trailer