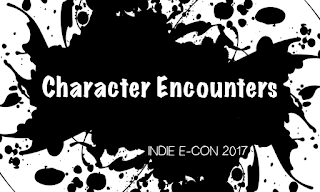 For the final day of Indie E-Con I wanted to do something fun and take part in Kendra's "Character Encounters" which is a writing link-up she runs on her blog where the author writes about encountering their characters in a place Kendra chooses. She came up with a special one for the E-Con where you encounter the characters at a physical Indie (not)E-Con! I just thought this sounded like a lot of fun, and figured you guys would hopefully find it entertaining so I decided to give it a go. Go check out the other Character Encounters people have done for E-Con as well right here! Also visit Kendra's blog and see the rest of E-Con here.

Disclaimer: This is officially the strangest thing I have ever written. But I guess every author has to try to meta thing at least once :P This kind of turned into more of a satire on just my writing process with some in-jokes, but I hope it's still entertaining. Enjoy!

Also this was something I meant to do back during the Earthly King blog tour, but here is a sketch dump of some Na Fianna sketches I have done so I hope you enjoy those too :) 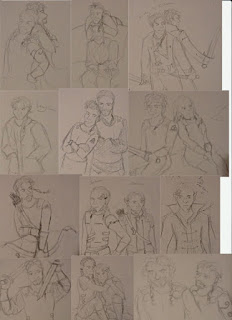