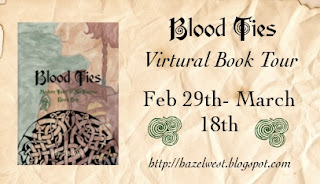 I'm excited to announce the Blood Ties Virtual Book Tour! Ciran and his company are going to be appearing around the blogosphere between February 29th and March 18th so you can all get to know a little more about Blood Ties and Ciran Mac Cool. So save the dates and follow the tour itinerary below for excerpts, interviews and more!


Also don't forget to enter the giveaway for a signed copy of Blood Ties as well as Swag! (And this is separate from my Goodreads one, this is just for the tour, so enter both!)

a Rafflecopter giveaway
Posted by Hazel West at 9:40 PM