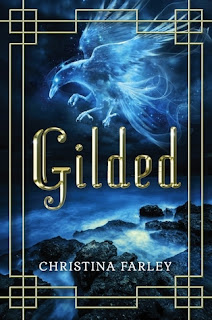 Title/ Author: Gilded (Gilded #1) by Christina Farley
Genre: YA, Urban Fantasy, mythology
Rating: 4/5 stars
Synopsis: Sixteen-year-old Jae Hwa Lee is a Korean-American girl with a black belt, a deadly proclivity with steel-tipped arrows, and a chip on her shoulder the size of Korea itself. When her widowed dad uproots her to Seoul from her home in L.A., Jae thinks her biggest challenges will be fitting in to a new school and dealing with her dismissive Korean grandfather. Then she discovers that a Korean demi-god, Haemosu, has been stealing the soul of the oldest daughter of each generation in her family for centuries. And she's next.

But that’s not Jae’s only problem.

There's also Marc. Irresistible and charming, Marc threatens to break the barriers around Jae's heart. As the two grow closer, Jae must decide if she can trust him. But Marc has a secret of his own—one that could help Jae overturn the curse on her family for good. It turns out that Jae's been wrong about a lot of things: her grandfather is her greatest ally, even the tough girl can fall in love, and Korea might just be the home she's always been looking for.

Thoughts on the Overall Book: I love any book about mythology of any kind and since I knew next to nothing about Korean mythology this was a really fun book to read, and besides that it had a likable cast and was a good adventure. I was actually lucky enough to meet Christina Farley at an author event so I was doubly excited to read this book.

Cover--Yea or Nay: I love the covers for these books. It's what attracted me to them in the first place :)

Characters: Jae was a likable heroine. She was tough and smart but didn't really come across as having an attitude. I think she took herself a little too seriously on occasion, but that is just a human flaw that made her relatable. At the end of the day, she stepped up to do what she had to do and was willing to protect those she cared about. Marc was probably my favorite character in the book, he was a really nice guy and likable and even better, he allowed Jae to sort of accept help and made her, not vulnerable, but realize that she wasn't alone in her mission. I also really liked her grandfather, he was an interesting character, and I actually would have liked to have seen more of him. Same with her Aunt, but hopefully in later books. Haemosu was also a pretty awesome villain. He was classy and suave but obviously dangerous. He also made good on his threats which made him all the more realistic.

The Romance: Inevitably, there is a little romance between Jae and Marc, but it doesn't interrupt the storyline and I actually really liked them together :)

Writing Style: First person present tense from Jae's perspective. I didn't mind being in her head, and I think it was a good way to tell this story, with her finding out all about the strange things that are going on. The descriptions of the gods and mythological creatures was really cool, and I could easily picture what it is like to live in Korea, the descriptions of it were very vibrant. My favorite descriptions of it were of the Spirit World. They were really vivid and almost like a dream sequence which fit really well in my opinion. I also loved the build up of the story here. There were a lot of little twists and turns and all come together in the end and I liked seeing how things all fit together to end in an awesome climax and a cliffie. Overall a well crafted adventure story that made me want to read more. I also want to say that while Jae is joining the ranks of heroine archers, her skills actually have a place in the folklore so it's cool and not just cliche.

Accuracy/ Believability: As I said before I know nothing of Korean mythology and very little of the culture itself, but I do know the author lived in Korea for a while and did expensive research so I trust that she got it right! Reading this book definitely made me want to explore it more, though.

Problems/What bothered me: No real problems here. I really enjoyed this book.

Conclusion: 4 stars. A fun and interesting adventure novel. I really look forward to continuing the series!

Recommended Audience: Girl read ages 14 and up, Fans of urban mythology and fantasy would enjoy this one. Probably would appeal to Percy Jackson fans as well.
Posted by Hazel West at 10:39 PM