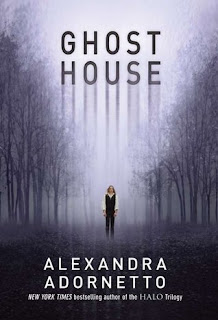 After the loss of her mother, Chloe Kennedy starts seeing the ghosts that haunted her as a young girl again. Spending time at her grandmother's country estate in the south of England is her chance to get away from her grief and the spirits that haunt her. Until she meets a mysterious stranger…

Alexander Reade is 157 years dead, with secrets darker than the lake surrounding Grange Hall and a lifelike presence that draws Chloe more strongly than any ghost before. But the bond between them awakens the vengeful spirit of Alexander's past love, Isobel. And she will stop at nothing to destroy anyone who threatens to take him from her.

To stop Isobel, Chloe must push her developing abilities to their most dangerous limits, even if it means losing Alex forever… and giving the hungry dead a chance to claim her for their own.

Thoughts on the Overall Book: I actually ended up liking this book more than I expected to. Every YA romance I've picked up lately has been annoying, but this one was actually enjoyable with likable characters. Plus an awesome setting always helps. I can't really hate any book set in an English manor house when ghosts are involved ;)

Cover--Yea or Nay: I do like the cover…but not the guy on it. He's just too bleh.

Characters: Chloe is actually a very likable and sympathetic character for this sort of book. She doesn't have an attitude, and when she does show a little bit of one, I can understand why she feels that way, and she has just lost her mother when the book begins. Considering what she's gone through, I think she handles herself pretty well. Plus she's sweet to her younger brother, and I always think it makes a character better if they are a good elder sibling. The only complaint I had about her character was her infatuation with Alex because it was a little too fast and without explanation for me, but besides that, I did like her. I also really liked her younger brother Rory. he was adorable and quiet and I just wanted to hug him. I liked her grandma as well, I actually would have liked to see more of her. I didn't mind Alex as such; he wasn't really dislikable, I just didn't overly care for him. He really didn't have enough character for me to give an opinion on and what you find out about his backstory, didn't make me sympathetic to him at all. Likewise with Isobel. I didn't feel sorry for her at all, she was obviously the reason this whole mess happened and Alex was just as guilty for not being a man and stepping up. If he wanted her so badly, he should have said so, not snuck around like a coward. And I really didn't see why her husband was so bad to begin with, we only ever were told he was (view spoiler) Anyway, so I couldn't really feel bad for Alex. My favorite character was Joe. He was just so sweet, and funny, and the perfect guy, really. And it goes without saying that I loved Mavis and May, the paranormal investigator sisters. They were really fun.

The Romance: It wasn't exactly terrible, but it was sort of borderline insta-love. Though to be fair, I suppose having a handsome ghost hanging around would be a little bit mind-boggling. This was also a book that had a potential for a love triangle and didn't, and, this might sound odd, but I almost wish it had. Here's why: I didn't really like Chloe and Alex together. We pretty much know it's sort of impossible, plus it just seems like he's two-timing because of Isobel. And, honestly, if he hadn't professed his feelings for Chloe that happened way too fast to be at all genuine, this whole problem never would have happened, and just like in his past, he can't be man enough to fix it. I really wish Chloe had paid more attention to Joe, I really liked them together and while there is some hints, it was obvious she still totally went for Mr. Ghosty. So yeah, that was my main issue with this book. I just couldn't understand her infatuation with Alex and even more, the fact that she never questioned his loyalty to her because of his relationships with Isobel.

Writing Style: Nothing really special, but not bad. It was first person past tense which was nice. Chloe wasn't a bad character to have as a narrator. And actually, I will say, that despite the fact this is a romance, she really didn't spend a lot of time mooning over the guys, there was a little bit of it, but I think the action and the problems with Isobel carried the book forward so that it was more than just all the blah romance stuff that gets on my nerves after a while. There were parts that were actually scary too, and I loved the overall setting. The whole thing felt like a misty moorland which is always awesome. Pretty much any time you give me a book with ghosts set in England I will at least enjoy it for that alone.

Accuracy/ Believability: Not totally applicable, but there was a nice amount of traditional folklore, what with the salt and lavender and other ghost-repelling herbs. Though it would have been easier if they had just called in the Winchesters to salt and burn ;P

Problems/What bothered me: Aside from the romantic issues that I already addressed I didn't have any other problems with this book. And I am interesting in continuing the series, even though I have a feeling it might get more into the annoying territory later on.

Conclusion: 3 stars. A quick and enjoyable read despite a couple issues I had. I'm interested to see where it goes next.

Recommended Audience: Girl read, ages 16 and up. Would probably appeal to readers who enjoyed Anna Dressed in Blood though it's more romance than horror.

(Read this review with spoilers on Goodreads)
Posted by Hazel West at 11:37 PM