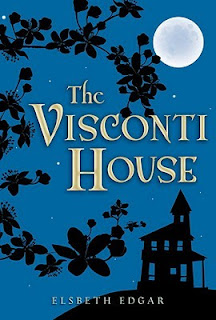 Title/ Author: The Visconti House by Elsbeth Edgar
Genre: YA, mystery, contemporary
Rating: 4/5 stars
Synopsis:Fourteen-year-old Laura Horton doesn't quite fit in. She lives in a grand crumbling mansion on the edge of town that everyone calls "the haunted house," and she has more in common with her parents' eccentric artist friends than with the girls at school. So when loner Leon Murphy moves in next door, Laura avoids him at first; she doesn't need anything else different or weird in her life. But when Laura becomes obsessed with uncovering the history of her house--the Visconti House-- she finds that Leon understands her need to know what happened to the lonely Italian gentleman who built it. Together, Laura and Leon begin to unearth the mansion's history, a history of elegant dances, thwarted love, and secret rooms. In their quest for the truth, the unlikely pair forms a deep friendship. But will their friendship, sparked by a shared interest in the past, survive the present?

Thoughts on the Overall Book: I actually got this book because I thought it was a ghost story, but it's not, it's actually just a mystery. However, I was still not disappointed with it and found it to be a very nice charming little almost coming of age story.

Cover--Yea or Nay: I do like the cover, I am always rather fond of simple silhouette artwork.

Characters:Laura was a nice character to read about. She was very quiet and slightly unassuming, but at the same time I was instantly drawn to her. Maybe because I was a little bit like her, though when I was younger. By the time I was her age I was a firebrand. Still, she's the kind of character a lot of introverted, artistic people can relate to, shy, for the most part living in her own world, and pretty much misunderstood and outcast from "normal" people. Her struggles were very realistic with the need to fit in, even if she wasn't entirely sure that she wanted to fit in with the other kids, and struggling through being for the most part alone. I also really liked Leon. He too was quiet, but more for his own reasons than that he was actually shy. He was more like I was at that age, secluded by choice, and he saw in Laura a kindred spirit that eventually grew into a friendship. I also liked the supporting characters, they provided a colorful backdrop to the story, but it's really Laura and Leon's story. I actually find it interesting and enjoyable that so much characterization can be crammed into such a short book, but it was.

The Romance: There's a little romance between Laura and Leon, but it grows from friendship and I enjoyed seeing that a lot.

Writing Style: It's a very simple, yet descriptive style. I was instantly pulled into this book from the first chapter, and was able to relate to Laura. The characters made the book come alive, but the storyline itself was intriguing enough to make me keep reading. I love stories set in old houses, especially old houses with secrets and this one did not disappoint. While not necessarily sensational in any way, there was still the anticipation of finding out about Mr. Visconti and his house, and seeing the friendship between Laura and Leon grow. This book actually reminded me of The Secret Garden in many ways, it kind of had the same feel to it.

Accuracy/ Believability: Not really anything to be accurate about, it's just a simple contemporary mystery.

Problems/What bothered me: Nothing, it was just a nice little story.

Conclusion: 4 stars. I had a feeling when I saw the cover of this book that I was going to like it, and even if it wasn't what I thought it was going to be, I really enjoyed it. The ending was nice and happy and this made for a good in-between book for months of heavy reading.

Recommended Audience: Girl read ages 13 and up.
Posted by Hazel West at 9:14 PM