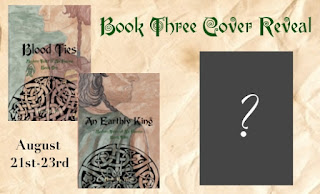 It's finally here! The cover and title revel for Book Three of the Modern Tales of Na Fianna (and a long time coming too, since the title did not want to happen for some reason). But without further ado, here it is! 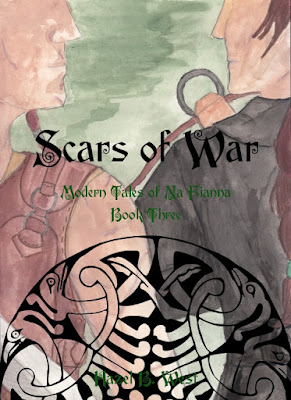 This cover features Cass and Aeden. Cass is one of the POV characters in this book, and I'm looking forward to what people think of her.

Another fun thing for the cover reveal: I did a time-lapse video while painting it, so you can check that out!

After lunch we hit the road and made our way to Carlow, which was about an hour’s drive from the coast.
“There have been more changeling problems this year than usual,” Rory was saying as we went along. “After we got that one last month, I thought I remembered seeing several more case files from earlier in the year.”
I frowned. I hadn’t remembered there being more, but then, most of the case files and reports were just things I heard about while I was working on something else and signed off on before handing over to Rory. That was why I had him after all, to handle the paperwork, so I took his word to be correct. “If that’s the case, then we need to get to the bottom of this. It’s probable they are all isolated occurrences, and there are simply more of them due to rogue Fae after all the upheaval that has gone on in the Faelands and the Courts in the last couple years, but if there’s anything to it, we need to find out before it escalates.”
“Maybe we just need to reiterate the importance of warding,” Rory suggested. “People have gotten a bit slack with the new treaties made, but they don’t understand that Faeries are still going to do Faerie things, even if they are technically our allies. And it’s really the Lesser Fae who do these things anyway, and most of them are still as yet unattached to any Court.”
“True,” I nodded. “It wouldn’t be a bad idea to work on a few new PSAs or, heaven help us, start some new classes. I don’t think teaching Faerie protection at a lamaze class would be any easier than trying to beat stranger danger into a selkie’s one track mind.”
Once we got to Carlow I pulled into the BPAFF station and we found Connell’s secretary there, waiting for us.
“He had to go track the kelpie but he said to give you the file for the changeling case,” she said, and handed me a manila folder. I quickly flipped through it but saw nothing out of the ordinary.
“Thanks, do you have directions to the house?”
As we got on the road again to go pay the family a visit, Rory read through the file for me.
“The Dempsey family: two kids—twin boys, age four. Apparently last week one, Tomas, got up in the morning and proceeded to eat almost all the food in the pantry, which was likely indication enough, but he’s been bad-tempered and naughty, even for a four-year-old, and the parents can’t do anything to control him.”


“Sounds like a routine changeling case,” I said as I pulled off down the private drive toward a quaint little yellow farmhouse that looked as peaceful as could be. I noticed as I parked the Land Rover though, that the back property, though fenced in, backed up against a wood. I had a feeling that was exactly where the Faeries had come in. I saw someone had strung bells on the gate as well as some bunches of rowan, but whether that had been there previously or was a new addition, I couldn’t tell. In any case, I knew it wasn’t going to keep out any Faerie determined enough to get in.
~~~~~~~~~~
This excerpt was only part one of what you can read today for a cover reveal special. To read the continuation of this excerpt, check out the other blogs taking part in the reveal in the order below:

I'm running a giveaway for e-copies of the first two books of the Na Fianna series so you can read them before Scars of War comes out on the 31st. All you have to do to enter is comment on any of the cover reveal blog posts. The more you comment on, the more times you are entered to win! I will be doing the drawing on the 23rd so you have until then to win.

You can either leave me your email address in the comment, or your Twitter handle if you have one. If you don't want to leave either, just come to the blog on the 23rd and see if you won, otherwise, I will contact you through your email or Twitter.

But don't forget to visit the rest of the blog posts to read more excerpts! Comment on all of them for more chances to win!