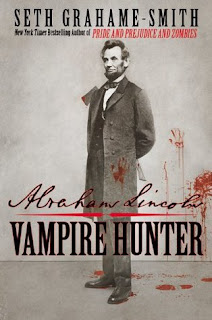 "My baby boy..." she whispers before dying.

Only later will the grieving Abe learn that his mother's fatal affliction was actually the work of a vampire.

When the truth becomes known to young Lincoln, he writes in his journal, "henceforth my life shall be one of rigorous study and devotion. I shall become a master of mind and body. And this mastery shall have but one purpose..." Gifted with his legendary height, strength, and skill with an ax, Abe sets out on a path of vengeance that will lead him all the way to the White House.

While Abraham Lincoln is widely lauded for saving a Union and freeing millions of slaves, his valiant fight against the forces of the undead has remained in the shadows for hundreds of years. That is, until Seth Grahame-Smith stumbled upon The Secret Journal of Abraham Lincoln, and became the first living person to lay eyes on it in more than 140 years.

Using the journal as his guide and writing in the grand biographical style of Doris Kearns Goodwin and David McCullough, Seth has reconstructed the true life story of our greatest president for the first time-all while revealing the hidden history behind the Civil War and uncovering the role vampires played in the birth, growth, and near-death of our nation.

Thoughts on the Overall Book: This has been a book I have put off reading for a long time. I'll admit, on paper it sounds completely ridiculous and stupid, but in actuality, I ended up enjoying it quite a bit, and I think it worked in a strangely twisted way.

Cover--Yea or Nay: This is the one I have, but I like the original cover much better.

Characters: Abraham Lincoln is essentially the Abe you know and love, but he kills vampires. I don't necessarily see this as a downside. This is just such a weirdly quirky book you kind of just have to take it for what it is. I liked his portrayal, and I liked a lot of the supporting characters too. I really did like Henry, and I also liked Abe's friends and fellow hunters Jack and Speed and there were obviously a lot of historical characters and some nice pop-ups like Poe. Overall I enjoyed reading about this version on Lincoln.

The Romance: Some romance but not really overwrought.

Writing Style: The writing style is what I feel ultimately saved this book. It's written in a biography style, which I don't always care for overmuch, depending on how it's done. This one, it worked with, because of the weird factor. In fact, I really liked it, and I don't think I would have liked this book half as much if it hadn't been written as such. The biographical narrative and the journal excerpts put together form an interesting feel to this historical paranormal story, and I approve. Not sure if I felt the prologue was a little cheesy or cliche. It wasn't terrible, but a little overdone. Of course, that might have been the intention as well.

Accuracy/ Believability: This period is not my division, so I'm no expert on it, and certainly no expert on Lincoln but from what I do know it seems that the historical parts of this story were definitely well-researched. And as for the vampires, I think the author did a really good job working them in and making them seem like a plausible addition to the historical setting. I don't find it completely hard to believe that if there were vampires in the south at this time period, that the rich landowners would be using them to make a little extra money. And also how some of the historical characters were vampires or vampire hunters ;)

Problems/What bothered me: Not much, really. This is one of those books that's either hit or miss, and once I realized I liked where it was going, I just went along for the ride.

Conclusion: 4 stars. An enjoyable if not a little wacky, summer read.

Recommended Audience: History buffs who want something alternate or paranormal, check this out. If you can't take a joke, don't bother.
Posted by Hazel West at 10:44 PM