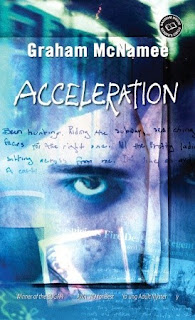 Title/ Author: Acceleration by Graham McNamee
Genre: YA, thriller, mystery, suspense
Rating: 4/5 stars
Synopsis:It’s a hot, hot summer, and in the depths of the Toronto Transit Authority’s Lost and Found, 17-year-old Duncan is cataloging lost things and sifting through accumulated junk. And between Jacob, the cranky old man who runs the place, and the endless dusty boxes overflowing with stuff no one will ever claim, Duncan’s just about had enough. Then he finds a little leather book. It’s a diary filled with the dark and dirty secrets of a twisted mind, a serial killer stalking his prey in the subway. And Duncan can’t make himself stop reading.

What would you do with a book like that? How far would you go to catch a madman?

Thoughts on the Overall Book: Thrillers involving serial killers are always fun (if you want to call them that), this one was no exception. My second book by Graham McNamee and I enjoyed this one even more than the last.

Cover--Yea or Nay: Yes, the cover is really creepy and cool.

Characters: I really liked Duncan as a character. He was a good hero, a little angsty and was also not a typical jerky teen boy even if he had been a bit of a delinquent when he was younger. I really loved the dynamics between him and his two friends, Vinny and Wayne, Vinny being the sort of quieter, 'smarter' friend and Wayne the more wild and troublemaking one. I really loved the story about Duncan and Wayne stealing toilets when they were thirteen. It made me laugh. Like with Bonechiller I think Graham McNamee did a great job portraying likable and realistic teen characters that I enjoyed reading about. The supporting cast was also likable.

The Romance: No romance to report, aside from a few mentions of Duncan's ex-girlfriend.

Writing Style: Pretty much the same as Bonechiller nothing super special, but entertaining and perfect for the kind of book it is. It was fast-paced, and action-packed without being too movie-ish and gave time for character development and everything as well. Duncan's narration is also pretty funny with some dry humor and I really liked being in his head and hearing how he describes his friends. The serial killer is super creepy too even though, SPOILER! you only get to meet him a little bit in the book. The journal entries are frightening and accurate. I was not disappointed.

Accuracy/ Believability: From my own research into behavioral analysis and criminal profiling (and yes, it does actually go beyond simply binge-watching Criminal Minds) the descriptions in this book and the research the boys do is pretty accurate. This book isn't as realistic or descriptive as books like I Hunt Killers but for younger readers it's still frightening.

Problems/What bothered me: Nothing really bothered me, I just enjoyed the book.

Conclusion: 4/5 stars. The ending actually did surprise me but it wasn't unsatisfying either. I actually ended up reading this book pretty much in one sitting (or at least in one night). It's a short quick read that for if you just want something entertaining and thriller-y.

Recommended Audience: Guy read, but girls can enjoy too. If you want creepy serial killer thrillers that aren't super gory or whatever, then check this out. ages 16 and up.
Posted by Hazel West at 5:34 PM