Like last month, I mostly read some re-reads but I did read a few new books too, and here's a couple that I enjoyed most! 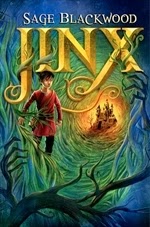 In the Urwald, you don’t step off the path. Trolls, werewolves, and butter-churn riding witches lurk amid the clawing branches, eager to swoop up the unwary. Jinx has always feared leaving the path—then he meets the wizard Simon Magus.

Jinx knows that wizards are evil. But Simon’s kitchen is cozy, and he seems cranky rather than wicked. Staying with him appears to be Jinx’s safest, and perhaps only, option. As Jinx’s curiosity about magic grows, he learns to listen to the trees as closely as he does to Simon’s unusual visitors. The more Jinx discovers, the more determined he becomes to explore beyond the security of well-trod paths. But in the Urwald, a little healthy fear is never out of place, for magic—and magicians—can be as dangerous as the forest, and soon Jinx must decide which is the greater threat.

Sage Blackwood introduces a daring new hero for an innovative new world as Jinx is joined by friends, battles enemies, and discovers life beyond—and even within—the forest is more complex than he can imagine, and that the Urwald itself needs him more than he could ever guess

Thoughts on the Overall Book: This was a really fun, unique fantasy read with an interesting story line, good characters and a god dose of adventure and humor. Pretty much just the kind of book I like to curl up with at the end of the day.

Cover--Yea or Nay: Yes, I really like the cover, it caught my attention and definitely looks like a fantasy novel. I also really love the title font.

Characters: Jinx is the kind of protagonist I love to read about (and one of the reasons I really like middle-grade books so much). He's smart, resourceful, and what's better, he does make his own decisions, even if they aren't always for the best, but without seeming like he's being disrespectful to others. He's very curious, and wants to know what there is to know about the world. I liked his simple genius that even he didn't realize he possessed. Simon was a good mentor/father figure character. Not quite as awesome as some others I've read, but still good, and I liked how the reader could tell he really cared about Jinx, even if he didn't always show it, and also for the fact that sometimes we really weren't sure why he did what he did. I also really liked Sohpie, and I wish she had been in the book more, but maybe we'll see more of her in the next one. Elfwyn and Reven were also really likable characters. Elfwyn was one of those enjoyable female characters who have spunk and are capable of taking care of themselves without having The Attitude and Reven was kind of the happy one, who was always good natured and polite but no less capable of taking care of business than the others. As for the villain, I thought the Bonemaster was really cool. Sometimes villains can get a little overblown and cartoony in middle-grade fiction, and while he was a little bit like that, you could also tell he was really dangerous, and the fact that he kept tiny people in jars was really rather frightening. I was not disappointed with him.

Writing Style: Third person, but from Jinx's perspective. I really enjoyed the writing style, it's written in somewhat of a light humorous style which is exactly what I like from these kinds of books. The descriptions and the world of the Urwald were well-crafted and held just enough of traditional fantasy elements to seem familiar, but was also different enough to be unique. I really enjoyed the world presented in this book, and how Jinx presents the different types of magic. I'm not always a fan of magic books, but this one actually made sense to me in how the magic worked, and I find I can enjoy those much better.

Problems/What bothered me: There was only one small thing I felt was a little lacking(view spoiler)

Conclusion: 4 stars. This is a really fun adventure novel that is great for when you want a quick read. It ended a little bit abruptly but I imagine the sequel will pick up right where it ended, and I look forward to continuing the story of Jinx and his friends.

Recommended Audience: Guy or girl read 10 and up. Anyone who enjoys a good fantasy adventure novel with fun characters and not an overload of magic.

(To read this review with spoilers go to Goodreads)

Meg and her siblings have been sent to the English countryside for the summer to stay with elderly relatives. The children are looking forward to exploring the ancient mansion and perhaps discovering a musty old attic or two filled with treasure, but never in their wildest dreams did they expect to find themselves in the middle of a fairy war.

When Rowan pledges to fight for the beautiful fairy queen, Meg is desperate to save her brother. But the Midsummer War is far more than a battle between mythic creatures: Everything that lives depends on it. How can Meg choose between family and the fate of the very land itself?

Thoughts on the Overall Book: This was a pleasantly enjoyable read, and while not the best fairy book I have ever read, it had a lot of the traditional tales and such that are always fun to see in such books for lovers of fairy lore.

Cover--Yea or Nay: Yes, I love this cover. It's so pretty and it obviously states what the book is about.

Characters: Meg is a nice protagonist. I liked her because, even though she's not the oldest of the siblings, she's the oldest girl and kind of takes on a motherly role among her brothers a sister. She smart but not without human failings which are obvious to see in the story. Rowan, the older brother, is practical, a quiet scholarly wise type of person, and I liked him too. Silly, the younger sister was your typical tomboy and she was enjoyable as well. As for the other children, I liked Dickie, who was the shy, bookworm, and the one who did all the research on fairies, so I liked him, of course. And I was rather devided in my opinion of Finn. As he was written and what he did, I didn't like him, obviously, but I had the feeling that he just wasn't or shouldn't have been as bad as he was portrayed to be. Because he was so young, I didn't think he should have been as malicious as he was, but that was just my opinion. I do think he should have had more of a defining moment and turned for the good in the end but since there's another book, I suppose his story isn't finished. I loved great aunt and uncle Ash, they were nice characters and Bran was your typical brooding, closed-off-from-the-world-for-his-own-reasons character. I also really liked Lemman the otter girl, even though she wasn't in the story a lot. In short there was a good cast of characters, and I liked the sibling relationships.

Writing Style: The style was my favorite part of this book, actually. It's written in kind of an old fashioned style, and read like a fairy tale, which is essentially what this is. I also liked how, while the book is all in third person, we got to see the insights of almost all the characters. I think that works good for this kind of story. The author also seems to have done quite a bit of research into fairy lore, and since I love that, I like to see people using the old legends and tales.

Accuracy/ Believability: Not totally applicable, but there was one thing that bothered me. The children are sent to England because of a major flu epidemic in the US. I wouldn't have had so much of a problem with this if it was set in the past, but as a modern day story, this was just a little strange, and I half expected the epidemic to have been some cause of the fairies, but it was never explained and it just kind of seemed a little weird to me. It just seemed almost like the author needed something drastic to happen to get the characters where they needed to be. The flu doesn't feature in any part of the story apart from that, so it just seemed a little off, but it might not bother everyone.

Conclusion:3 stars. An enjoyable read for any who like family stories and fairy stories.

Recommended Audience: 10 and up, readers who enjoyed the Spiderwick books would probably like this too.

(To read this review with spoilers go to Goodreads)


And don't forget to stop by later this moth to see all the fun stuff I'll be posting for NaNoWriMo! I can't beelive it's only hours away now!

On another note, Happy Halloween! Eats lots of candy!
Posted by Hazel West at 4:45 PM