Here's another poem I scribbled out tonight, after sketching a little bit. The picture was actually supposed Marcus and Esca from "Eagle of the Ninth" but the poem is kind of more about Reeve and Wallace's relationship in my own novel "On a Foreign Field". So, it's a little confused, but the picture inspired the poem, and well, I like to put pictures with my poems :-) I hope you enjoy both anyway. 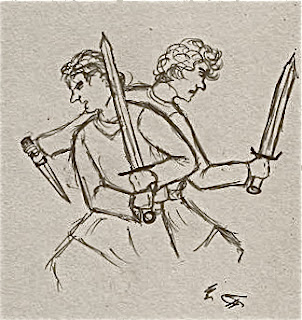 I swore to you, now long ago
That I would stand by you;
Whether war or strife should rend our life,
It’s only what a brother would do.
With sword in had, we’re back to back,
In shield wall, side by side,
And all the fear or hurt I have
From you I’ll never hide.
If ever one should hurt you
I’ll repay the same to him;
I know you’d do the same for me
To protect my life and limb.
Whether brothers by blood or bond
It matters little to me,
Though others might say it’s not the way
They don’t understand loyalty.
Though in truth we should be enemies
We are the truest friends:
Brothers in spirit, comrades in arms
Fighting ‘till this war ends.
From opposite sides of the war, we are
But it’s a promise that I’ll keep—
That I will stand beside you, brother
Through light of day or night so deep.
It’s one thing to be called a traitor,
Another to be called a friend.
I know I wouldn’t care at all for the former
If I had the latter to the end.
And now the drums beat once again
And we’re marching off to war,
Our deaths we leave in the hands of the fates,
We have a cause worth fighting for.
But mark these words, dear brother,
Whatever else I do,
Come weal or woe, come friend or foe,
I will stand by you.

Slainte, Hazel
Posted by Hazel West at 1:05 AM