Please refer to Part One Before reading this. And also...spoilers 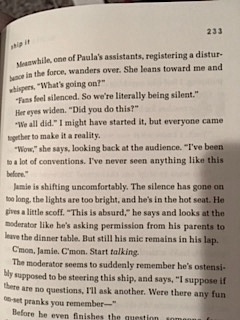 "Fans feel silenced" You are the audience. As much as you want to think you have a say in the matter. You really don't.  (+10) 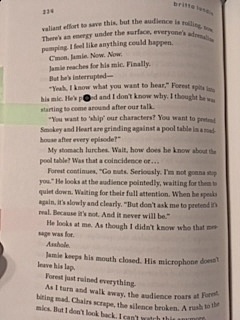 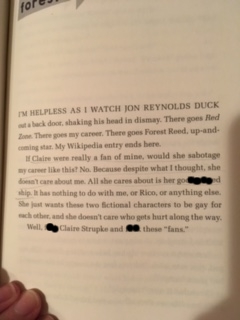 This was the only redeeming scene in the whole book. Forest has every right to be mad. He was trying to get a role in another movie, and at this point, if he quit the show it would just serve the "fans" right because they don't deserve him. And he is genuinely correct about what the fans think. I have seen so much hate for the writers and certain actors (ahem Jensen) from so-called Supernatural "fans" because they don't agree with their ship. And that is all they care about. (Side rant) like those fans who only start watching SPN at Season 4 and don't watch episodes that Cas isn't in. Like, I love Cas as a character, I love Misha, but these fans ONLY watch the show to prove their ship to the rest of us when they still have no grounds to stand on. And how can you really call yourself a fan if you didn't watch the early seasons with the boys growing up? With Dean's sacrifice for Sam and everything that entailed, the things that shaped who they became? Because they don't care about that, they don't care about the show and they don't really care about the characters, they just want to see their ship come to fruition when it NEVER will. 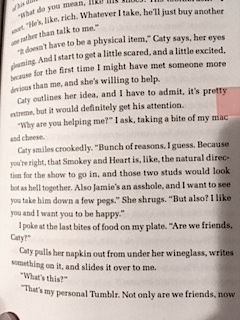 And here is where another PR person literally helps Claire plot to hold Jamie hostage and blackmail him. My poor Jamie needs to get better freaking help and vet these people to make sure they aren't diehard shippers of this crap. (+100) 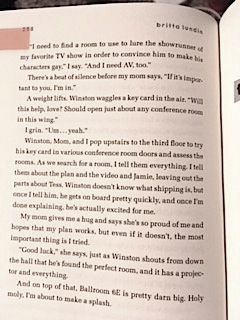 So she literally asks her mom and other adults to help her find a room to "Lure" the show runner into. And they help her. I wonder what would have happened if she'd asked them to help her kill him too? And you wonder why this book make me want to blow my brains out? (+200) 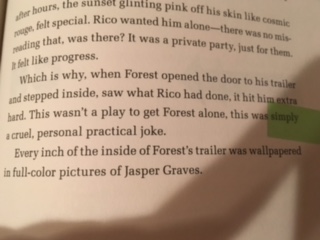 This is a selection from one of Claire's fanfics. Yep, she's writing RPF now because she's got it into her head to be so delusional that she thinks Forest's hatred for the SmokeHeart ship is because of his personal suppressed feelings for his co-star and she wants to write a story about that. (+100)
Bonus sins added because in this fanfic she steals a prank that Ruth Connell pulled on Mark Sheppard when she covered his trailer in pictures of Misha. This author obviously doesn't use anything original. (+10) 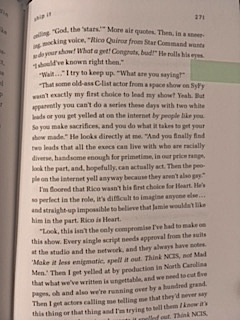 So this is during the discussion that happens when Claire holds Jamie hostage, and once, again, boy do I feel sorry for poor Jamie. Not only did he not get the actor he wanted to play one of the characters but he tells a very true story of what it's like so often writing for a network or publisher and trying to make a show (or book) fit their perimeters. 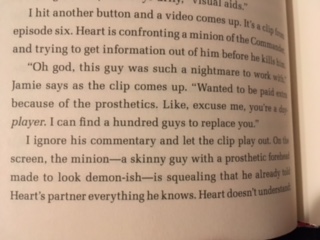 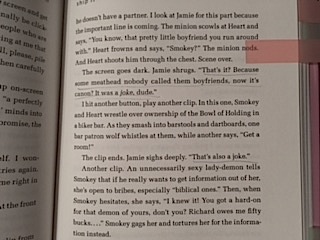 This is another truism to how these fans think. This is how villains taunt people. Get a life, Claire. And Jamie's right, it's a joke. I'm sorry you don't think it's funny. (+50) 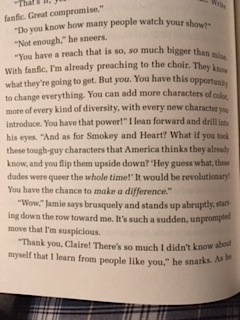 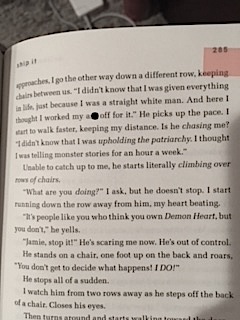 I think this whole passage speaks for itself. Again, poor Jamie. Bless this man who just wants to write a freaking story in a world where everyone forces you to use agendas to make potentially good fiction crappy. Just this line "I didn't know I was upholding the patriarchy. I thought I was telling monster stories for an hour a week." This almost makes me want to freaking cry at how real this is and how much I feel for Jamie here. This is just the kind of hate people get for writing Just Stories anymore. Oh no, it's not allowed to have Just a Story. It has to have just the right amount of diversity and by the "right amount" I mean, it must overcome the story itself to push agendas and therefor make it a campaign instead of a story. Anyone who writes a Story anymore is instantly penalized and called a racist and a bigot.

+100 sins for Claire bringing up this subject. 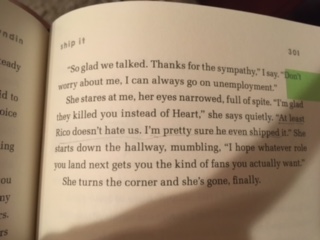 Okay, so this is after they watched the finale live at the last con and it's revealed that Smoky (Forest's Character) dies at the end. And I think it was also announced that there wasn't going to be a pick up for the next season because, go figure. And I love how she automatically thinks that Rico ships it just because he applies a little more tact to his answers than anyone else. Another thing, fans, just because actors don't actually come out and protest something, doesn't automatically mean that they ship it. And even if they don't necessarily mind that people ship something doesn't mean they play it that way on screen (+20) 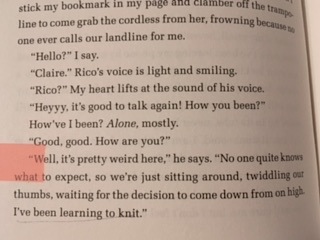 Another +10 sins for Discount Misha knitting like real Misha. 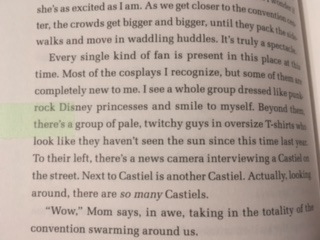 +1,000 sins for having the gall to actually reference Supernatural in this book. 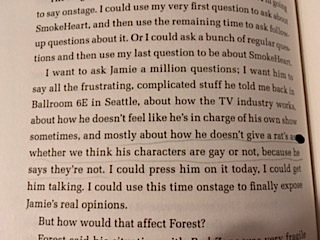 And once again, Claire is asked to moderate a panel after the complete crapfest she made of the last one. Again, she's thinking of blackmailing Jamie and putting him on the spot in front of the fans. Shockingly she decides not to do this. (+10) 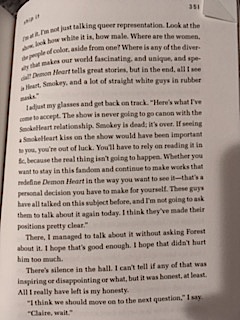 I don't even want to talk about what ensues at the end of this panel. Number one, this would NEVER happen and if it did it would never be serious. It was so obviously supposed to be to placate the readers' little disgusting fantasies but it made NO FREAKING SENSE to the story and was SO out of character for these guys, especially Forest. He and Rico did not have to freaking kiss on stage in cosplays of their characters for these ungrateful disgusting fans. (+10,000) 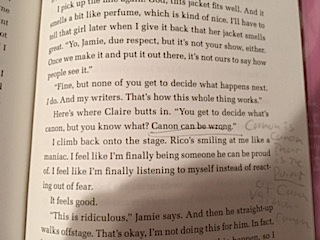 CANON cannot be wrong. Canon is always canon. Fanon is what it's called when the fans make it up.  (+1,000) And an extra +10 sins because this forced me to deface a library book. 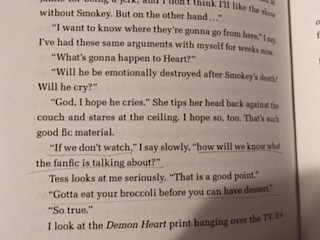 "Gotta eat your broccoli before you can have dessert."
You have no idea how many times I have seen this sentiment. I agree that fix-it fanfics are great, there's nothing wrong with fixing the trauma, but there are fans who expressly hate everything about a show and only read fan fiction. Why are you even in this fandom anymore????? +1,000 sins for my personal angst.

And that's it for the selections.

So, I’m going to leave you to make your own conclusion about this book but here’s a few interesting tidbits you may want to noodle on. And honestly, I’m not coming out and saying anything here, coincidences dohappen on occasion, but there was too much coincidence in the whole situation of this book to pass over completely.

-The author, Britta Lundin is apparently a writer for the show Riverdale. Riverdaleis a show owned by the CW.

-Supernatural is also owned by the CW and also Warner Bros.

-We all know Disney is trying to buy up other film companies. Guess who published this book? Freeform. Which is a publishing company owned by, yep. Disney. It kind of makes you wonder: blatantly obvious bashing of a certain fandom owed by a certain company, who on earth would publish this? Oh, the Fourth Reich—I mean, (you know what I mean)

-We also know that CW with all its DC Comics based shows is heavily in with Warner Bros. While it’s ABC that has affiliations with Disney, which they don’t let anyone forget. ABC also owns the Freeform TV channel which is all part of the same thing.

This also leads to the question as to why this particular author chose to write a book essentially bashing people in the same profession she’s in?

So, do with that what you will, my friends.

And just to be fair, I picked a couple other reviews off of Goodreads to show you that even people who ship this stuff don’t like this story. When my enemy becomes my ally, you know it’s bad.

Also, for a very in-depth discussion about this book with less ranting, check out this video from Alana King on Youtube