All I Want For Christmas Book Tag

I decided I needed to do a little holiday fun on my blog, and I've seen this "All I Want For Christmas" tag going around blogs and Booktube and it sounded fun to do, so I did it, even though, as usual, I cheated on some questions because I do that :P If you want to do it too, let me know! 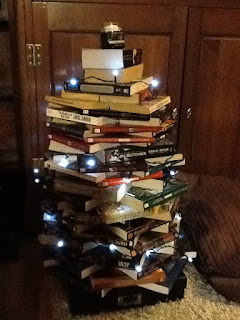 1) What fictional character do you want Santa to leave under your Christmas tree?
I’ve always wanted a Wesley Ayers from The Archived by Victoria Schwab J
2) What character do you want to kiss under the mistletoe?
Hmm, kinda weird because most of the books I read the characters are younger than me...o_O I guess I’m gonna go with Noah from The Raven Boys though because he’s just such an adorable ghost!
3) You write your Christmas list for Santa, what are the top 5 books on it?
Hmm, okay, I have so many books on my to buy list, I’m going to change this to books I need that are coming out in 2017
1. A Conjuring of Light (Darker Shades of Magic #3) by V E Schwab
2. Our Dark Duet (This Savage Song #2) (also Victoria Schwab)
3. Heart of the Storm (Undertow #3)  by Michael Buckley
4. Wrath of the Storm (Mark of the Thief #3) by Jennifer A. Neilsen
5. The Empty Grave (Lockwood & Co. #5) by Jonathan Stroud
4) It’s secret santa at Hogwarts, what do you most want to receive?
Um, one of those invisibility cloaks, please. (#notreallyaharrypotterfan)
5) You get to the spend the day with the characters and movie adaptation actors from one fandom, what do you pick?
So both the actual characters and the actors who play them?
Umm…so this isn’t a book adaption, nor is it a movie, but can I just pick Supernatural? Because not only would having Sam, Dean, Cas (and possibly even Crowley) around be incredibly awesome, but Jensen, Jared and the other fellas are really the only actors I care to meet and spend a significant amount of time with because they’re super awesome J And because Jared vs. Dean pie eating contest! :P And also Baby, because classic cars = yes.
6) What fictional animal would you like to replace Rudolph and be able to meet on your roof?
Ooh, this is a hard one. For some reason, the first thing that came to my mind was Harry Dresden’s dog Mouse (who is huge and fluffy and adorable in case you don’t know) pulling the Blue Beatle around as an improvised sleigh. Jim Butcher needs to write a Christmas story!
7) You invite 10 fictional characters to your new years eve party, who do you pick?
Oh boy, this will be entertaining:
1. Harry Dresden (The Dresden Files)
2. Carswell Thorne (The Lunar Chronicles)
3 & 4. Jackaby and Abigail (The Jackaby Series)
5, 6& 7. Lockwood, Lucy and George (Lockwood and Co.)
8. Richard Gansey III (The Raven Boys)
9. Howell (Howell’s Moving Castle)
10. Sherlock Holmes (Sherlock Holmes, duh)
8) What character would make a good santa (Doesn’t have to be appearance, personality counts too)?


Okay so the first idea that popped into my head for this was either Crowley or Gilan from the Rangers Apprentice series. I don’t know why, but either of them I could totally see :P
Posted by Hazel West at 9:40 PM