Review: The Cure For Dreaming by Cat Winters 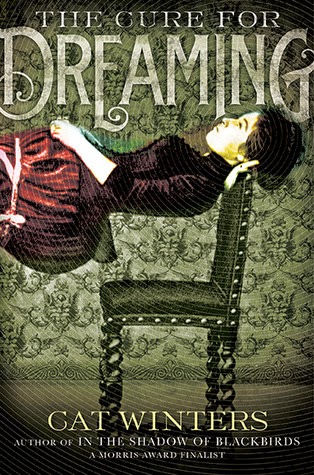 Title/Author: The Cure for Dreaming by Cat Winters
Genre: YA, historical, supernatural
Rating: 4/5 stars
Synopsis: Olivia Mead is a headstrong, independent girl—a suffragist—in an age that prefers its girls to be docile. It’s 1900 in Oregon, and Olivia’s father, concerned that she’s headed for trouble, convinces a stage mesmerist to try to hypnotize the rebellion out of her. But the hypnotist, an intriguing young man named Henri Reverie, gives her a terrible gift instead: she’s able to see people’s true natures, manifesting as visions of darkness and goodness, while also unable to speak her true thoughts out loud. These supernatural challenges only make Olivia more determined to speak her mind, and so she’s drawn into a dangerous relationship with the hypnotist and his mysterious motives, all while secretly fighting for the rights of women. Winters breathes new life into history once again with an atmospheric, vividly real story, including archival photos and art from the period throughout.

Thoughts on the Overall Book: I usually avoid suffragist books like the plague, but this one was actually enjoyable, and Cat Winters gives us another interesting supernatural sort of read that was not disappointing in the least.

Cover--Yea or Nay: I love the cover, I think it's really cool, the font is beautiful, and it's just the kind of things that makes me want to pick up a book, as the time period is obvious.

Characters: Olivia is an enjoyable protagonist. Mostly, I liked how she was a strong female character, but even though she's into women's suffrage, she's still not a rampant man-hating harpy like so many of them are. She just wants to make her own way in the world, and I respect that. There were a few times I didn't totally agree with her, but for the most part, I didn't have any complaints on her character. Her father on the other hand, I enjoyed hating. At first I wasn't sure whether he was a more misunderstood character or not, but as the book progressed, I could not forgive him for what he did to his own daughter. There is no excuse for that, it's just disgusting. Then there was Percy, who I saw coming a mile away, but he wasn't so terrible that I spent a whole lot of time hating on him. I loved Henry, as is probably to be expected. He was just the kind of male characters I always fall in love with. And his devotion and the loving relationship he shared with his sister made me like him more. (view spoiler) As for supporting characters, I also liked Frannie and her family, and Percy's other friends were so fun to dislike.

The Romance: There's not a ton of romance here, and no love triangles, thankfully. As is pretty obvious, Olivia and Henry end up forming an attachment to each other, and there's kissing involved, but it never gets so mushy that it's annoying and takes over the plot. I was very invested in their relationship, and I thought it very sweet.

Writing Style: Cat Winters is a very good writer, what I love especially is how she is able to capture a time period so well that it really feels like you're in it. This was not nearly as dark as In the Shadow of Blackbirds but it was just as well written, and still had a strange supernatural twist to it, even though there were sadly no ghosts in this one. I really loved how she described the way Olivia was able to see things after her hypnotism, it was very vivid and it worked for me. You have to know going into this book that it's going to be a little strange, but that's part of the joy.

Accuracy/ Believability: Very accurate as far as the time period. I would have liked an author's or historical note in the back, but from what I know of the time period anyway, it seemed pretty much very well done. Of course the hypnotism stuff isn't exactly real to life, but it gives the story a cool twist.

Problems/What bothered me: I probably never would have read this book had it not been recommended to me by a friend I trust, because I do not read suffragist novels, but this one was the most if not the only, tasteful suffragist novel ever. Yes, there were still a couple parts that had my eyes rolling, but I think it captured the softer side, and through Olivia who just simply wanted to be able to make her own way in the world, it was bearable. It was certainly not a rampant man-hater novel, and I respect Cat Winters for that.

Conclusion: 4/5 stars. Enjoyable book. Not sure whether I liked this one or In the Shadow of Blackbirds better, but I am really looking forward to the next novel Cat Winters comes out with.

Recommended Audience: Girl read 16 and up. Fans of gothic supernatural historical novels would enjoy it. Definitely check this out if you also liked In the Shadow of Blackbirds

(Read this review with spoilers on Goodreads)
Posted by Hazel West at 10:48 PM