Re-Release Party for "His Own Good Sword" by Amanda McCrina!


Moving the Tuesday Snippet to Wednesday again, so I can give you all a feature for one of my fellow writers, Amanda McCrina, and welcome her to the sister/brotherhood of Indie Writers! Yay!


Amanda recently terminated her contract with a small publisher to go indie, and today is the re-relase of her historical fantasy novel His Own Good Sword, with a new lovely cover and all! 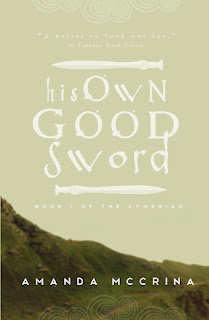 1. How does it feel to be an indie author now?

On one hand, it's extremely liberating to know I have complete control over the entire book-production process. I know the design/formatting stage can be frustrating for self-pubbed authors (especially self-pubbed authors on college-student budgets, like me!), but I absolutely enjoyed it. I've always had something of a graphic-design urge, so it was exciting to be able to put that to use on my own book.

On the other hand, it's kind of scary: there's no one to blame but myself for any mistakes!

2. Have you made any changes to your book?

There were a few mundane typographical errors that have been corrected for this edition. I also took the opportunity to rework or flesh out some passages I felt were lacking in the first edition. For the most part, these changes weren't drastic--a sentence or two added here and there, some slight variations on wording to improve the flow. But there are some passages that have changed pretty significantly, especially towards the end; hopefully the changes will shed more light on certain characters. I've also added a map and a character list to both the paperback and ebook versions.

Apart from the sequel to His Own Good Sword (tentatively scheduled for release this December), I'm currently working on a standalone novel called Aquae, a historical fantasy set in 1st-century-AD Wales. It's about a half-Roman, half-British boy who discovers he's inherited his mother's druidic abilities and is accused of attempting to murder his hard-bitten soldier father. It's a loose retelling of the Grimms' fairy tale "The Water of Life."

4. What are you reading right now?

5. What books and movies are you looking forward to this year?

I have to admit I don't keep up with new book releases the way I should, probably because most of my favorite authors have been dead at least fifty years. But I'm looking forward to Elizabeth Wein's Rose Under Fire, for sure.

As far as movies go--well, I'm a huge film buff, so I could talk the rest of the day about movies. Like the rest of the planet, I'll be going to see Star Trek Into Darkness and Man of Steel. I'm holding out hope for Pacific Rim, because I love Guillermo del Toro as a director, but I wasn't too impressed with the first trailer. I'm also curious about Neill Blomkamp's Elysium, and yes, I'll probably see World War Z, because the book was so surprisingly good and because I'm a closet zombie aficionado.

I... don't understand why this is even a question. Coffee, of course--dark, strong Italian coffee. Starbucks' Caffe Verona is my favorite.

Read an excerpt from His Own Good Sword


By now Verio had nearly overtaken the four rebels before the cliff. One of them was falling behind, was perhaps riding with a wound—it would explain why they’d only gotten this far in better than half a day’s time. Another dropped back to stay alongside him. The other two came to the cliff face and dismounted and stood to face the troop with bows drawn back in their hands. Tyren lost sight of the two stragglers in the trees. He saw Verio go riding for the bowmen, sword in hand—too close for arrows to do much good. Verio cut one of them down before he’d the chance to loose. The other let fly a wild shot and turned to run with one of Verio’s men close at his heels. He fell before he’d taken five stumbling steps.

An arrow sped from the trees and took Verio’s man in the throat as he returned along the cliff face from his kill. He fell from his horse with the reins still clutched in his hand. The horse shied and bolted. Tyren saw Verio’s head jerk up in startled realization, saw him slide from his saddle and gesture wildly for a defensive formation—saw his men dismounting, falling back against the cliff in a ragged half circle, their shields out, facing the trees.

He straightened in Risun’s saddle.

“Columns,” he said, to the four men who were still sitting their horses behind him. “Follow my lead.”

Here are some fun re-release stuff that Amanda has going on, so you had best take advantage of it!


Get a free Kindle copy of His Own Good Sword from the 7th through the 11th! Yes, you read that correctly—the book will be free in Kindle format for the first five days of its release, so you are literally without excuse if you don’t have the book on your Kindle by midnight on the 11th.
Not to denigrate those Illustrious Readers who prefer physical books to electronic ones! If you purchase the $7.99 paperback edition of His Own Good Sword from either Createspace or Amazon between the 7th and 11th, forward a copy of your confirmation email to amandamccrina AT gmail DOT com and I’ll make arrangements with you for a free piece of signed artwork by yours truly featuring any character/object/whatever-you-choose* from the book. (For an example of my art style, take a look at this. Disclaimer: Batman is not a character in His Own Good Sword. Though that would have been awesome.)

Where you can find Amanda:

You can also read my review of His Own Good Sword on Goodreads
Posted by Hazel West at 1:00 AM