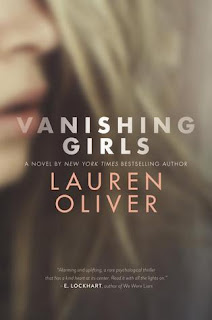 Dara and Nick used to be inseparable, but that was before the accident that left Dara's beautiful face scarred and the two sisters totally estranged. When Dara vanishes on her birthday, Nick thinks Dara is just playing around. But another girl, nine-year-old Madeline Snow, has vanished, too, and Nick becomes increasingly convinced that the two disappearances are linked. Now Nick has to find her sister, before it's too late.

In this edgy and compelling novel, Lauren Oliver creates a world of intrigue, loss, and suspicion as two sisters search to find themselves, and each other.

"Alarming and uplifting, a rare psychological thriller that has a kind heart at its center. Read it with all the lights on." -- E. Lockhart, author of We Were Liars.

Thoughts on the Overall Book: This is a book that I have had my eye on since it came out. While I sort of expected more of a page-turning suspense novel, I was greeted by a very surprising and just as page-turning psychological thriller. I was not disappointed.

Cover--Yea or Nay: Meh. It's okay, but it doesn't do anything for me. The title is more interesting than the cover art.

Characters: This is kind of one of those books where I didn't really care overmuch for the characters. Nick wasn't, overall, terrible, I didn't mind reading from her POV. I definitely felt sorry for her, and I think she, as a character, did exactly what she needed to for the story. I was more interested in her overall relationships with Dara. Dara I didn't necessarily care overmuch for. I don't like those kind of crazy party girls. But again, it's the kind of book where the characters serve their purpose whether you like them or not. I did actually like Parker, he was a nice guy and think he was a good addition to the cast.

The Romance: The romance in this book is really just too complicated to explain without too many spoilers so I'll just tell you that, yes there is romance of various natures.

Writing Style: While the writing itself isn't anything horrible special, I loved the way it was put together, and the plotting was definitely really well done. I read this book in two days (most of it the second) because it was just one of those that you literally can't put it down. i think I sat for at least three or four hours and finished it because I actually couldn't stop. I did actually like the random journal entries and news articles scattered throughout it too. I don't always like that, but in this case, I think it helped the reader to know more of what was going on. I really can't say a lot about this book because if I say too much it will spoil the twist which was amazing but it was well done.

Accuracy/ Believability: Again, for the sake of spoiling it, I can't say much, but the problems this book dealt with were portrayed pretty accurately to my knowledge.

Problems/What bothered me: As I said before this is more of the kind of book you read for the plot and not because you like the characters, so I won't say much about my personal feelings about some of the characters. It didn't bother me because I knew it was all part of the story and it had to be. I am continuously skeptical as to how sixteen-year-olds can get around so much and find a steady flow of liquor though. Every once in a while, I can understand, but the amount of times it happened in this book was a little ridiculous. Not to mention them being able to get into clubs.

Conclusion: 4 stars. It was a 3 star book right up until the twist which almost warrants 5 stars, in all honestly because I literally gasped and had to stop and process what I had just read but factoring in everything else, it's a four star book. This is one of those that I really want to re-read not that I know the twist so I can fully appreciate all the little hints throughout it. Overall, really enjoyed it and for my first Lauren Oliver YA book, I was not disappointed.

Recommended Audience: Girl read 17 and up due to content. If you like sister stories and psychological thrillers, you really need to read this one. You will not be disappointed.
Posted by Hazel West at 9:10 PM