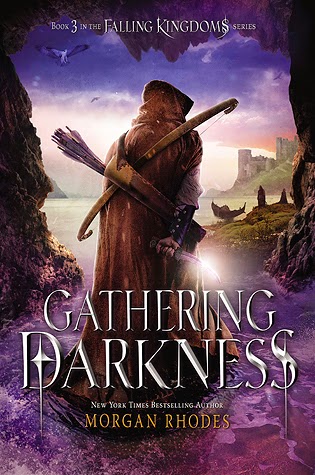 Prince Magnus has just witnessed torture, death, and miracles during the bloody confrontation that decimated the rebel forces. Now he must choose between family and justice as his father, the cruel King Gaius, sets out to conquer all of Mytica. All Gaius needs now are the Kindred - the four elemental crystals that give godlike powers to their owner. But the King of Blood is not the only one hunting for this ancient, storied magic...

• THE KRAESHIANS join the hunt. Ashur and Amara, the royal siblings from the wealthy kingdom across the Silver Sea, charm and manipulate their way to the Kindred, proving to be more ruthless than perhaps even the King of Blood himself.

• THE REBELS forge ahead. Princess Cleo and vengeful Jonas lead them, slaying with sweetness, skill, and a secret that can control Lucia's overpowering magic - all so they can use the Kindred to win back their fallen kingdoms.

• THE WATCHERS follow Melenia out of the Sanctuary. They ally in the flesh with King Gaius, who vows to use Lucia's powers to unveil the Kindred.

The only certainty in the dark times is that whoever finds the magic first will control the fate of Mytica... but fate can be fickle when magic is involved.

Thoughts on the Overall Book: While I did enjoy reading this book, it's probably my least favorite of the series so far for various reasons. But I do still like to read these, and the next one (the finale?) promises to be really awesome.

Cover--Yea or Nay: I always love the covers for these, I think they're gorgeous. Something about the colors and they work well for the fantasy theme.

Characters: This was partly why I didn't like this book as much as the previous two. I do still like Cleo, she has stayed pretty much the same, still does what she has to do, and doesn't do too badly with it either. I also continue to like Magnus, I really liked his character arc in this book and can't wait to see where it leads in the next. I do still like Jonas as well, and still am kind of annoyed with Lysandra, but whatever, there wasn't a huge amount of them in the book. I really want to say I still feel bad for Lucia, but I'm gonna be honest, while I understand her going "dark side" isn't really her fault, she doesn't seem to really care, even if it does scare her on occasion (though not as much as it probably should). I just seemed like a whole teenage rebellion thing. I just don't really care for her character anymore. King Gaius is still evil, but even then, I wish there was more of him being evil. He's slowly losing his evil king status. And I didn't care for either Ashur or Amara. I honestly didn't really see the whole point of their involvement in the plot. It seemed a little unnecessary, and don't even get me started on Asher and Nic...yeah.

The Romance: This was the main problem I had with this book. There was just too much sleeping around and for what, to make people jealous? I hate that, and it makes it hard for me to respect characters who do that. And the whole thing with Lucia and Alexius sealed the deal with me on how I felt about her character. But I won't say anymore just to be polite.

Writing Style: The writing style is still good. In fact, I have always loved the engaging style the author uses, and the POV jumping. It keeps the story flowing and exciting when fantasies can tend to drag on occasion. I did like how this one went into more about the search for the Kindred which I had been waiting for, and there was a lot of good stuff, more settling on the intrigue than the actual action like the first two. It was still a moderately quick read, only really dragging a bit for me at the last quarter.

Problems/What bothered me: Apart from the problems already mentioned, the book just simply suffered from the 'middle book curse'. I wasn't anticipating this one to be as exciting as the first two considering it's the third and one right before the climax, so I wasn't entirely disappointed either, I just wish there had been a little less romantic angst. It really wore on me after a while.

Conclusion: 3 stars. Not my favorite in the series, but I have very high hopes for the next one, and look forward to it!

Recommended Audience: If you enjoyed the first two, than this one is worth reading. Any fans of high fantasy would enjoy these. Older teens due to content 18 and up.
Posted by Hazel West at 5:02 PM