Okay, so I promised, to reveal the story I will be working on for NaNo today, and I have been really mean and hinting at this one for a while because I was rather proud of the idea and I didn't want everyone to know about it too soon. But okay, now I can't leave you in the dark anymore. In short this is what it's about:

Yep, this is my first official attempt at paranormal and I'm both excited and nervous, but because I'm writing this as a historical with paranormal thrown in, I have a good feeling that I can make this book work. You'll all have to let me know as I post excerpts this next month. I'm really looking forward to hearing everyone's thoughts on the story, and the idea itself, for or against. All I know is that I'm bloody excited to start writing this book since I've had the outline done since June. Here's a more in depth look into the story. 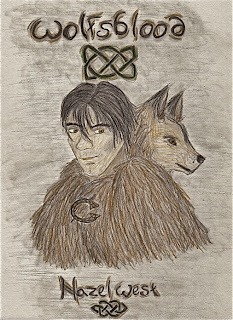 Alexandrus has been hoping for his promotion to centurion for a while, not only for his own personal gain, but to make his father, a wounded veteran, proud. However, promotion does not come in the way he expects. His new posting is for a frontier fort on the Northern Border, and he'll be commanding a cohort of Celtic auxiliaries. He was chosen for this particular job since his grandmother was British and he speaks the language. So he sets off for his new posting leaving behind a disappointed father and the life he has known in the south. When he reaches the fort, he finds it the most horribly run place he has ever seen. Men are sleeping on duty, no one seems to be motivated to do anything, and the decurion is "currently indisposed". He soon makes it his duty to join with the other centurions and whip the men into shape, but it proves difficult, for the fort is full of troublemakers, both well-meaning and otherwise. But the lack of discipline is not the only thing strange about the new posting. Where are the horses if it's supposed to me a cavalry cohort? Why do most of the men seem to have strange golden eyes, and why is it that most of them have bite scars? It can't be that they were all so unlucky while hunting for wolf skins, could it? Alex disregards an old story he hears about a Druid curse, but when it comes the night of his own initiation, he begins to wonder whether there is truth to it after all.

That's the story in a nutshell, or at least as much as I'm willing to tell at the moment ;) Interesting? Strange? let me know!

Also, you can go onto Pintrest and see my board for Wolfsblood (the title) which I have just unlocked from being secret :) Again, if you're doing NaNo, let me know and if you want to add me as a buddy I'm there under "Theartfulscribbler" just like my Twitter account.
Posted by Hazel West at 5:03 PM