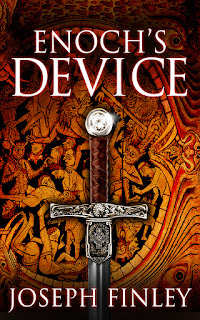 Thoughts on the Overall Book: When I started this book I was kind of expecting a Dark Ages version of Indiana Jones, and while there are similar elements, it’s also an original story. Interesting concept, good historical fantasy, and an exciting adventure novel.

Cover--Yea or Nay: The cover definitely fits the kind of story this is, so yes, I like it.

Characters: Ciaran and Donall were good main characters, Donall was a pretty good mentor, and Ciaran was your typical young man who is thrown into a difficult situation due to drastic happenings. I liked to see him grow through the story. Alais, I’m kind of torn about. I didn’t dislike her, but she certainly wasn’t one of my favorite heroines either. For the most part she seemed mainly like a victim of circumstance and despite her role in the story I kind of felt she was only there to provide a damsel in distress. I don’t think the story would have been bad without her. Geoffrey could have easily played her role. Ademar was a pretty good villain. He was frightening, and you knew he was perfectly capable of all he threatened. I also liked the supporting characters, though some sadly didn’t stick around long enough for me to really get to know them. One of the main complaints I had with this book was the fact that I thought it could have done with a little more characterization. I got to know Ciaran and Donall pretty well, and even Alais, but at the same time, I think there could have been a little more internalizing, and relationship between the characters. Since this is an action/adventure story though, and more plot driven, it didn’t bother me as much as it could have. I cared about the characters, but I didn’t form a die-hard attachment to them either.

The Romance: There really wasn’t much in the way of romance, but there is probably an inkling of there being something between Ciaran and Alais in future.

Writing Style: While not the best of most beautiful I have ever read, the writing style fits the book genre well. It’s an action/adventure novel and on occasion kind of reads like a movie. Again I can tolerate that because of the genre. In fact, I think this book would make an awesome movie. On that note, it was very visual, and the description was easy to picture and very vivid. This is something I am always glad of in books like this because reading fantasy novels that I can’t picture or follow really bothers me. The mixture of historical events and mythology and biblical myth (not sure what else to call it) was pretty interesting and unique. It made for good historical fantasy material and there’s a detailed author’s note in the back of the book explaining what is what.

Problems/What bothered me: Apart from the characterization pet peeve I have and that fact that I obviously didn’t really agree with the biblical aspect of this book (though I didn’t expect to seeing as this is fantasy) I really didn’t have any other big problems. I think the beginning could have been stretched out a little more to get to know the characters a little better before all the action started, but again for this kind of book that’s acceptable.

Conclusion: 3/5 stars. It was a very good debut novel, a fast read and a good adventure. Despite the couple niggles I had, I did enjoy it.

Recommended Audience: Historical fantasy fans and those who love books about puzzles and codes that lead to finding hidden artifacts.

I received a free copy of this book from the author in exchange for an honest review; that in no way changes my opinion or rating for this book.
Posted by Hazel West at 6:34 PM