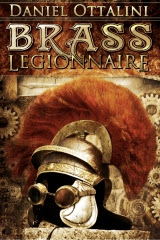 Hello readers! I'm very excited to tell you that newly published author Daniel Ottalini has agreed to do an interview for my blog. His book, "Brass Legionnaire", is an exciting alternate history/steampunk novel combing awesome steampunk gadgets with the Roman Empire. Today he'll be talking about his book and writing in general.

First of all, when did you realize you were a writer?


I've always enjoyed editing, but I had never really thought of myself as a writer until Brass Legionnaire. It was sort of funny, because I've started stories and even books before, but never finished them. In my opinion, writers are people who finish stories, not just start them. Once you finish one, then you are a writer.

How did you come up with the idea for “Brass Legionnaire”?


Brass Legionnaire is an offshoot of an inside joke between my girlfriend and myself. It stuck in my head all night long and refused to let me sleep until I had written it down. After that, it sort of took a life of its own and grew rapidly. I had the entire novel with parts of other books in the series written down inside of a week.

What made you choose to combine steampunk with the Romans, and how did you come up with all the awesome steampunk machines in the book?


My three favorite types of novels are alternate history, historical fiction, and steampunk novels. Elizabethan England is the most prominently featured steampunk era, and I know that few authors have split from this mainstream era. The fashion and weapons and technology are easier to imagine because you already have a lot of fantastic machines to reference. For Brass Legionnaire, I had to think at a completely different angle. I've always loved Roman history, and this is just a logical progression to me of 'what if Rome had survived?'

The machines in the novel - most particularly the  mechaniphant - are adaptations of animals that they Romans feared and respected. One of the most terrifying weapons of war the Romans faced were the elephants of Carthage - because it took them a while to figure out how to defeat them. It makes sense that the Romans would seek to emulate it and design a 'better' elephant that could be used in war - one that wouldn't be stopped by normal means. The other designs haven't been fully fleshed out yet. But there will be more in Copper Centurion, I promise!

Do you have a set writing schedule, or do you just do it whenever you get the time?


As a full-time teacher, its really hard for me to write during the school year. I aim for about 1000 words on the weekend, but that's rare for me. During the summer, I write at least 1-2k words a day, with more on the weekends. I finished Brass Legionnaire in one summer.


Hmm, that's tough. I'd say Constantine, although all the characters are like my children and I 'love them equally.' Constantine starts as a jerk, but he grows up somewhat. He might regress next book a tad - not facing life or death situations tends to let him slip up.

What are some of your favorite books and authors? Who inspires you?

I love books by S.M. Stirling, Harry Turtledove, and Rick Riordan. I can't ever narrow down a specific book that is my favorite because it changes all the time! Those same authors also inspire me and help me think about things that I would not normally consider.
Do you have any hobbies besides writing?

Haha, I teach, there is no time period. Although I do enjoying video games and soccer outside of my day-job.
Do you have any strange quirks or habits when you write like muses, favorite music or snacks?

If I'm writing a battle scene, I'll listen to music from Lord of the Rings or Snow White and the Huntsman (that's new) - Any classical music that is really dramatic works well for battle scenes. When I write, its in fits and bursts - I am very distractable and probably have four or five internet windows open while I write.
I know are working on a sequel to “Brass Legionnaire” but besides that do you have any plans for further books, or even a different series?

Well I've planned the series out to five books. I also have some ideas floating around for a series that takes place at the same time, but on a different part of the globe. I really like the idea of mixing steampunk with cultures that aren't the standard Elizabethan fare, and needless to say, I've got the possibility of one, maybe even two more series lined up in my head.
And lastly, what is the best advice from your own experiences that you would share with any aspiring writers or newly self-published authors?

Finish your writing and find a really good editor and cover artist. They make the difference. Oh, and get people to read it before you send it to the editor. If you're self-publishing, you're responsible for everything. Your book should look good from the outside and read well on the inside. It's all about image. The cover art and blurb grab the reader, while the writing keeps them. If you have both, you can't fail.


Thanks so much, Daniel, it was a pleasure to have you! If you're interested in Daniel's book you can find it on Amazon from the link below:


And also visit his blog "Modern Papyrus" for updates on his books and tips for other writers.

Slainte, Hazel
Posted by Hazel West at 9:00 AM