So, if you've been following me on social media you might have seen me tease a bit about this book, but now that NaNo is over, I am officially starting promotion on it as I'm hoping for a February release. 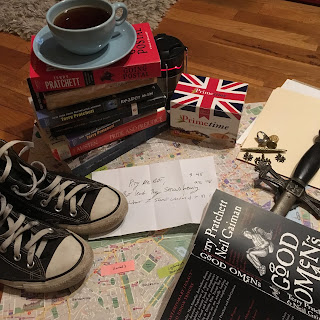 What is The New Emperor's Concerto about?
The year is 2223 and the world is on the cusp of World War Four. London is rife with anarchists and secret plots. It looks like dark days are coming for the British Empire. Darker than any that have been seen for decades.

But luckily England has some help.

Sir Lysander is the King's Righteous Man-and all that entails. He's the king's right hand, and a red one at that, the man who stands in the shadows and does what needs to be done for the protection of his country.

Eidolon is a phantom, the anarchist group Apophis's top retrieval expert. They need something, he gets it, no matter the consequence. Even though he'd secretly prefer to be in his flat with his cat and a good book.

They've been butting heads for a while, but in times like these loyalties are known to change and right now, any help is good help. They just didn't count on being the only thing standing between England and the start of the next world war.
~~~~

So if you like futuristic stories with a historical flair, and the good guys and bad guys having to work together to save the world, this is for you.

You can now add it on Goodreads HERE

So, I'm currently working on raising money for a cover artist and the launch (because, starving artist). So I'm going to be doing a book sale this next week with some old books I don't want anymore (More on that later!)

I have also started a Ko-Fi account, which, if you don't know what it is, is sort of a virtual tip jar. You can go on and "buy me a coffee" and it will go toward my goal I've set for the launch. Between that and what I raise for the book sale, I'm hoping to have enough money so that I don't have to pay out of pocket for the cover artist and all the things that go along with the launch of a book. (Swag, giveaway copies, reparation for time spent on social media, etc). Essentially, anything will help out, and Ko-Fi works through PayPal so it's completely safe for all parties.

Eventually, I'm going to set up my Ko-Fi for subscriptions sort of like a Patreon but I'll do that a little closer to the release date and will let you guys know about that then. But it will definitely have some more exclusive perks you will be able to take part in for all of my upcoming projects.

Info about the book sale will be up here on Sunday when the sale starts. I will be sending out invites with the link to anyone who is "friended" to me on Goodreads so if you want to know as soon as the sale is live, you can go add me as a friend on GR. Otherwise, just follow my social media (Instagram and Twitter) for info. I hope to see you there!