I'm very glad today to introduce debut author, Amanda McCrina who agreed to do an interview with me and is going to talk a little about her new novel "His Own Good Sword". I just read it recently and it's a great book! You can read my review on Goodreads here. 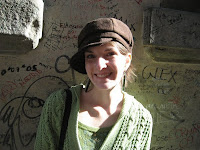 First off, when did you start writing?

I tried my hand at NaNoWriMo for the first time in 2007, and won, and that was when I really started taking writing seriously. I’d been writing off and on for a long time before that--for just about as long as I can remember, actually--and I’d always thought that theoretically it’d be nice to be an author, but that was when I first started devoting serious time and effort to it.

What inspired you to write “His Own Good Sword”?

My love for Roman history and culture played a big part. I spent a semester abroad in Rome in 2009, and that experience definitely helped shape the story and flavor the world behind the story. I also owe a huge debt to Rosemary Sutcliff, both stylistically and thematically. They say to write what you want to read; to be honest, a major reason for writing “His Own Good Sword” is that I’d run out of Rosemary Sutcliff books to read.

How did you go about creating the world in your book? What were your inspirations for the different people?

The world of “His Own Good Sword,” Cymeria, existed independently before this particular storyline did, though not always in its current form. Originally it was more of a typical medieval fantasy world. But then I fell in love with Italy, and by the time I wrote the rough draft of “His Own Good Sword” for NaNoWriMo 2010, I had reimagined Cymeria as a pseudo-Roman world (an “alternate antiquity,” as a friend of mine likes to put it), with my Vareni modeled on the Romans, and the Cesini based on the ancient Britons. It’s not an exact analogue; I’ve rather indiscriminately mish-mashed several different periods of Roman history, with some tweaks of my own. But I did want it to feel grounded in reality, so it still required a lot of research (did the Romans use horseshoes? How did their postal system work? And so forth).

The specific characters had their own evolutions. None of them are deliberately modeled on real-life figures of any sort. I wanted them to feel totally organic within the world of the story. In creating characters, my basic starting point was to imagine how and why people might react differently to the same cultural stimuli. My hero, Tyren, is concerned for truth, justice, and all those important things (and I love him for it), but he’s still very much a product of his upper-class, privileged environment; he can be arrogant, insensitive, even bigoted. Meanwhile, my antagonist, Luchian, has nearly the same background and upbringing as Tyren, but he manifests it a bit differently, shall we say.

What was the most difficult part about writing “His own Good Sword”?

I had, and still have, difficulties with action scenes. The battle scenes in “His Own Good Sword” were the last things to be written; I actually started querying the manuscript before I could bring myself to finish them. (For future reference, I wouldn’t recommend doing that.)

What was the most fun?

Plotting--by which I mean to say stretching, twisting, and beating the plot into submission--was challenging and frustrating, but so much fun at the same time. There’s nothing more satisfying than having a thorny plot problem (and I had lots of them) finally work out.

Who was your favorite character to write about and why? (You can choose more than one if you have to!)

It’s hard to pick favorites! I love both Tyren and his father Torien, and both of them came fairly easily to me (perhaps because they’re both very similar, though neither of them would admit it). But I’d have to say my favorite character to write was Aino. He stays in the background for most of the book, so the reader really doesn’t get to know him all that well, but I think he’s probably the most complex of all my characters. He gets to play a bigger part in book two, and I’m excited about that.

As a writer, do you have any quirks when you write?

I like having complete silence when I write, so I’m usually in my room with the door closed. I also have the odd compulsion to write my drafts in Notepad, then write the final draft in OpenOffice with the Notepad draft open for reference. I think it’s because it’s impossible to get distracted with Notepad.

What are your favorite books and authors? Who inspires you?

I have too many favorite books to list, I’m afraid. But my all-time-favorite book is Ernest Hemingway’s “A Farewell to Arms” (and Hemingway is my favorite author). Rosemary Sutcliff’s “The Lantern Bearers” is a close second, though. As far as nonfiction goes, my favorite book is George Orwell’s “Homage to Catalonia,” his autobiographical account of the Spanish Civil War.

As for who inspires me... at the risk of exposing myself as a hopeless history nerd, I’ll say that three of my heroes are Patrick Hamilton (16th-century Scottish martyr), Claus von Stauffenberg, and Major Richard Winters of Easy Company.

What do you do when you’re not writing? Have any other hobbies?

I’m a huge cinephile. I also like to dabble in graphic/web design. At present, most of my non-writing time is taken up by school; I’m currently in my senior year at the University of West Georgia, studying history and political science.

Guillermo del Toro’s “Pan’s Labyrinth” has been my favorite for a while. It’s just a beautiful film. Ridley Scott’s “Black Hawk Down” is runner-up; in my opinion, it’s the best war movie ever made.

In your opinion, what is most important to you in a book?

Theme is important to me. I’m usually willing to overlook shortcomings in other areas if I like a book’s overall theme. And there are certain themes in particular that appeal to me. I’m a sucker for father-son relationships, villains with redemptive arcs, and honorable characters facing impossible moral dilemmas. (In other words, I like “Star Wars.”)

If your book was made into a movie, do you have any choices for actors who would play your characters?

I usually have pretty clear mental images of my characters, and unfortunately I can’t always think of actors who fit. There are a few exceptions, though. I imagine Muryn looking something like Jeremy Irons. And I almost immediately envisioned Hailee Steinfeld for the role of Tyren’s sister Challe. A dark-haired Alex Pettyfer would fit my vision of Tyren closely enough, I suppose.

What are you working on now?

I’m currently finishing up the sequel to “His Own Good Sword.” It’s called “The Sword Unsheathed” and it’s due out from Winter Goose in August 2013. I’ve also been toying with an idea for a fairy-tale retelling that may end up being my NaNo project this year.

And lastly, what is the best advice you would give to a new writer?

I always hesitate to give writing advice, since I’m still a relative newbie, and because there’s no one “right” way to write. It’s a very indefinite process. But I will say that nothing helps my writing more than reading. If I ever hit a block in my writing, reading is what gets the creative juices flowing again. And while I do think you should write what you want to read, don’t read only the things you like to write. No matter your chosen genre, your writing will be so much more well-rounded if your broaden your reading horizons. 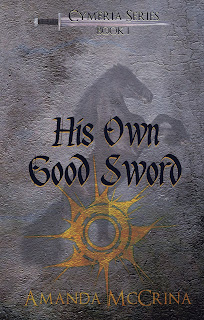 If you want a copy of your own, you can find "His Own Good Sword" through the links below: