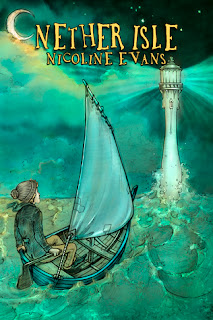 Title/ Author: Nether Isle by Nicoline Evans
Genre: Contemporary, supernatural, fantasy, YA
Rating: 4/5 stars
Synopsis: Lonely is a state of mind, solitude is a way of life. Confusing the two was never an issue for Theodore Finn, at least not until he found himself immersed in a world where nightmares were real.
Nether Isle is built upon a foundation of secrecy. The unimaginable truths living amongst the locals are kept hushed and often ignored. But when Theodore moves there from Alaska, the secrecy ends up being his worst enemy. His naiveté leaves him prey to the dangers lurking around his new home and when the truth is finally revealed, he is already tangled in a web of trouble. Too late to prevent it and too deep to escape, Theodore is forced to find the strength to fight it. Thrown into this strange new reality, he taps into the locals for help. Home to mystery and magic, the rough and jaded inhabitants of Nether Isle band together to save their home. Used to operating alone, Theodore must learn to trust strangers and adapt to the supernatural world unraveling around him.Set in a run-down fishing village off the coast of Maine, Nether Isle shows the battle between good and evil, on both a large and personal scale. It reveals the fine line separating the two opposing forces and how light can often stem from a dark place. This paranormal fantasy captures the spooky feel of isolation when facing a force as great as nature. Nautical in setting, gothic in feel, this story is one for our buried imaginations.

Thoughts on the Overall Book: I love supernatural/ghost stories, and I especially love supernatural/ghost stories when they are set in misty coastal towns so did this disappoint? No it did not.Cover--Yea or Nay: I really like the cover it's pretty and creepy at the same time. I think it matches the feel for the book very well.Characters: Theodore was a very likable protagonist. I instantly felt sorry for him for his situation, being pretty much stuck in the town with no friends and an alcoholic and abusive father. I liked him even more for the fact that we got to see him grow throughout the story. He was a very well-written and realistic dynamic character. I really enjoyed seeing his relationships with the other characters grow as well when he started to become fiends with Ruby and Rowan both of whom I liked, and I loved the mother/son relationship he shared with Adelaide. She was actually one of my favorite characters, I liked how she took Theodore in and gave him family when he didn't have any. As for Bianca's character (view spoiler) I will say that I really loved the Wiccans and Ouijans, they were such colorful and fun characters, I would have liked them to have more page time. Over all, this book presents a really likable and well-rounded cast of very dynamic characters.The Romance: In reality not a whole ton of romance, again don't want to spoil it: (view spoiler)Writing Style: It was really good. Very descriptive and colorful. I really was able to feel like I was there in the misty town and I loved the dour and delightfully creepy notes of the ghost storyline. What I think stood out to me most about this book though, was the fact that while it is a supernatural suspense/adventure, there's a lot of lead up and character building that happens. Most people would probably only write half of this story, and the length might make the book drag for some readers, but for me, I loved the time it took to get to the real plot line. The buildup only made it more suspenseful instead of making the book drag, and it kept me turning pages because whenever I thought there was a hint of something, I needed to know where it led. And I think it's because of this that we were given such realistic characters instead of your typical action hero types who really have no personality. This book made me laugh and cry because I cared about the characters.Accuracy/ Believability: Not really applicable. But I do still enjoy the take on the ghostiness in this story all the same ;)Problems/What bothered me: Not really any problems to report. The only complaint I could make is that it took me a while to remember all the Wiccans and Ouijans and I wish we had had more time with them initially, but further on in the book, I got them straight.Conclusion: 4 stars. I really enjoyed this book! I was lucky enough to meet Nicoline Evans at BookCon and got this one signed. I will definitely be checking out her other books now :)Recommended Audience: Fans of ghost stories or creepy supernatural fantasies who also want a good deeper storyline would enjoy this. Girl or guy read, ages 14 and up.

(read this review with spoilers on Goodreads)
Posted by Hazel West at 5:56 PM