Review: I AM NOT A SERIAL KILLER by Dan Wells 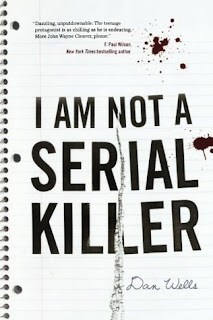 Title/ Author: I Am Not a Serial Killer (John Cleaver #1) by Dan Wells
Genre: Thriller, mystery, Supernatural,
Rating: 4/5 stars
Synopsis:John Wayne Cleaver is dangerous, and he knows it.

He's spent his life doing his best not to live up to his potential.

He's obsessed with serial killers, but really doesn't want to become one. So for his own sake, and the safety of those around him, he lives by rigid rules he's written for himself, practicing normal life as if it were a private religion that could save him from damnation.

Dead bodies are normal to John. He likes them, actually. They don't demand or expect the empathy he's unable to offer. Perhaps that's what gives him the objectivity to recognize that there's something different about the body the police have just found behind the Wash-n-Dry Laundromat---and to appreciate what that difference means.

Now, for the first time, John has to confront a danger outside himself, a threat he can't control, a menace to everything and everyone he would love, if only he could.

Dan Wells's debut novel is the first volume of a trilogy that will keep you awake and then haunt your dreams.

Thoughts on the Overall Book: I picked this book up expecting something akin to I Hunt Killers and…didn't really get that. The synopsis of this book fails to mention the supernatural element so that was a little jarring. Once I got past that though, I was able to enjoy the book more.

Cover--Yea or Nay: It's kind of bland, but I do like it, I think it works for the kind of book this is.

Characters: John Wayne Carver…I'm still a little unsure how I really feel about him. While I was able to sympathize and even relate to Jazz Dent in I Hunt Killers I'm not sure I was totally able to do that with John who is definitely more of a psychopath and rather frightening. Maybe I liked him because of that? I enjoyed reading about him and from his point of view too. It was an interesting perspective to have and I totally applaud the author for being able to get into that character--and just for going there in the first place. I know how scary that can be as an author. So I don't know that I can say I really liked him, but I did like reading about him. It was interesting reading about the other characters from his point of view too. I actually liked his friend Max and Brooke as well. I sort of felt sorry for his mom, but at the same time, I think she could have done more to understand his condition and not just either freak out or pretend nothing is wrong, but I guess that's just human nature. Mr. Crowley was an interesting character. (view spoiler)

The Romance: None. I don't even think I'm going to call a budding romance between John and Brooke yet.

Writing Style: I did love the writing style. As I said before I always applaud authors for going out of their normal comfort zones (or at least I hope they are) and writing characters who go beyond reluctant or anti-heroes to maybe even past dark hero status. To put yourself in the head of a potential serial killer is a feat of skill, especially if you can make it sound accurate which Dan Wells does. And the fact that it's in first person makes it even better, and makes the reader experience some uncomfortable moments.

Accuracy/ Believability: Despite the supernatural element, the psychological depictions of John's character are spot on, and I really appreciate the research the author must have had to do into psychological disorders and serial killers.

Problems/What bothered me: As I mentioned before, my only complaint was that I thought demons were more boring than serial killers. I know there's something wrong with me...

Conclusion: 4 stars. I do look forward to continuing this series. Now that I know what I'm getting into, I think I'll be able to pick up the next book with fresh eyes and enjoy it more without the jarring realization that it's supernatural.

Recommended Audience: Girl or guy read, 17 and up. Fans of I Hunt Killers, who would like to see it crossed with Supernatural would like this. And for the record, it's actually less gritty than I Hunt Killers as well. Even though I think this is classed as 'adult' I would say, at least the first book, reads like YA.

(Read this review with spoilers on Goodreads)
Posted by Hazel West at 10:24 PM