Review: "The Pennyroyal Academy" by M. A. Larson 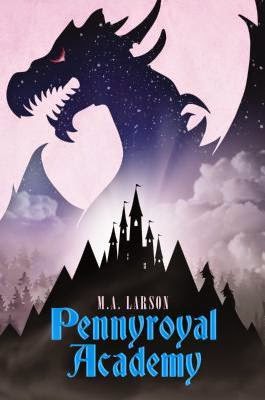 A girl from the forest arrives in a bustling kingdom with no name and no idea why she is there, only to find herself at the center of a world at war.  She enlists at Pennyroyal Academy, where princesses and knights are trained to battle the two great menaces of the day: witches and dragons. There, given the name “Evie,” she must endure a harsh training regimen under the steel glare of her Fairy Drillsergeant, while also navigating an entirely new world of friends and enemies. As Evie learns what it truly means to be a princess, she realizes surprising things about herself and her family, about human compassion and inhuman cruelty. And with the witch forces moving nearer, she discovers that the war between princesses and witches is much more personal than she could ever have imagined.

Thoughts on the Overall Book: I had expected to like this book before I read it, but it's also one of those you end up liking more and more as you get into it. Overall, i thought it was a very nice story, and I liked it a lot!

Cover--Yea or Nay: I do like the cover, and it's not even so pink that I feel embarrassed to carry it around haha. It has a very fairytale feel to it, and, hey, I love dragons.

Characters: Evie is a wonderful character. She's just the kind of girl I like to read about in these sorts of stories. She was attitude free, she conquered her fears and did what she had to do, she stood up for her friends, and overcame obstacles that came into her life. I also really liked Remington, he was a sweet guy, funny, and an enjoyable character. Evie's friends were nice too, I liked Maggie and Demetra, and felt particularly sorry for poor Basil. The only complaint I had was that I would have liked to see more of their interactions, it always seemed that Evie was apart from them, and partly that was her character, but I would have liked to see more of them doing things together. Malora was pretty horrible to Evie to, although I did end up feeling sorry for her once you find out what is really going on. The witches were actually more frightening than I expected, and I was not disappointed in that. Overall, a great cast, and characters I liked well enough to return to.

The Romance: There is a little romance between Evie and Remington, which at first I wasn't sure about because I originally thought the characters were younger than they seem to be in actuality. I wasn't against it, and I do like them together, there were just a couple parts where Remington was jealous and acting like a little girl that I didn't particularly care for, but otherwise, I didn't have any complaints.

Writing Style: The style of writing is actually very good, though it did take me a few chapters to get into it for whatever reason. Once I got used to it, I really enjoyed it. It had a very fairy tale quality, especially in the first few chapters, and was quite fast paced, and descriptive and made for easy reading. The world building was really cool, and I loved that there are all kinds of mentions of the old stories, and a lot of the places' names come from Grimm stories and it was really cool, but gave a different take on things. It did sort of have a Harry Potter feel to it with the boarding school and all, but I think that can be forgiven.

Problems/What bothered me: I didn't have any real complaints at all. I enjoyed the story a lot.

Conclusion: 4 stars. I just liked this book more and more as I continued to read it, and I really look forward to continuing the series and seeing very Evie's story goes.

Recommended Audience: Girl read ages 12 and up. I actually kept thinking of Princess Academy by Shannon Hale when I was reading this, and I think if you liked that one, you would enjoy this as well.
Posted by Hazel West at 4:48 PM