Review: "The Wild" by Christopher Golden and Tim Lebbon

This is a re-read for me (I usually do a re-read every month) but I wanted to post the review because it's one of my favorite series, and no one seems to know about it, so I hope you will check these books out after reading this review. Please give the authors your support! 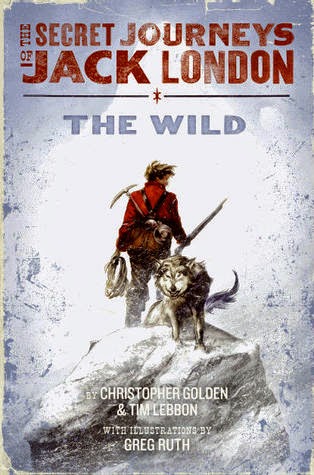 Title: The Wild (Secret Journeys of Jack London #1) by Christopher Golden and Tim Lebbon (Illustrated by Greg Ruth)
Genre: YA, Historical, Supernatural
Rating: 5/5 stars
Synopsis: The world knows Jack London as a writer who lived his own thrilling, real-life adventures. But there are parts of his life that have remained hidden for many years, things so horrifying even he couldn’t set them down in writing. These are the Secret Journeys of Jack London.

We meet Jack at age seventeen, following thousands of men and women into the Yukon Territory in search of gold. For Jack, the journey holds the promise of another kind of fortune: challenge and adventure. But what he finds in the wild north is something far more sinister than he could ever have imagined: kidnapping and slavery, the murderous nature of desperate men, and, amidst it all, supernatural beasts of the wilderness that prey upon the weakness in men’s hearts.

Acclaimed writers Christopher Golden and Tim Lebbon, along with illustrator Greg Ruth, have crafted a masterful tale both classic and contemporary, a gripping original story of the paranormal in the tradition of the great Jack London.
Review:

Thoughts on the Overall Book: This was one of those books for me that has such a unique premise that I had to read it.. This series is about a young Jack London, before he really became famous, and his supposed 'secret journeys' that are written down, as we see in the preface, by a companion of his who he meets in the book. It was truly nothing like I thought it was going to be when I picked it up, in fact, about a third of the way through, I really had no idea which direction it was going and I liked that. There are so many predictable books out there, but this one really caught me by surprise in every chapter and I could never guess what I would find on the next page. It was very strange, but in a good way, and the kind of way I like. But I'll talk more about that later.

Cover--Yae or Nay: I LOVE the covers for these books and the illustrations inside. I love the weathered look of the picture and how Jack and the wolf are both on it and you can only see a back profile of Jack. Still some of my favorite covers.

Characters: I liked how Jack was portrayed. I don't know too much about the real Jack London, but I really liked how this teenage version of him was portrayed. And from what the authors said in their authors' note, his character is pretty accurate. I liked his two friends, Jim and Merrit and the boy Hal who he rescues from getting taken by slavers up in the Yukon. The slavers were appropriately nasty, and they really were vile. Lesya was appropriately mysterious and exotic, but I won't say more about that for fear of spoilers.

Writing Style: The writing style is partly why I gave the book five stars. This was a very well written book, and the style fit the story perfectly and felt reminiscent of Jack London's writing. It was vivid, and visual and I could totally see all the scenes playing out in front of me which was great because some of the strange scenes could have been very vague. I am a fan of books that portray fantasy and supernatural happenings realistically, if that makes any sense, and this book really did. I liked the setting of the Yukon because it's such a deserted place, that you could actually believe the happenings of this book could happen. I liked how they brought in the story of the Wendigo which came from that area, and the Wendigo was portrayed to be very frightening. There's also some Russain lore in the book too, dealing with the forest spirit, Leshii. That part of the book for me was almost creepier than the Wendigo. This is more of a narrative book, and there's long chunks without dialogue, but it's hardly noticeable if you're not a fan of narrative writing. I go either way depending on who writes it, but this one you will not notice the difference at all.

Problems/What bothered me: I didn't have anything to complain about, truthfully, this book was just so odd that I just kind of went along for the ride and didn't really think about it too much. It kept my attention though, and I cared for the characters, so I must have enjoyed it! Upon re-reading, I actually liked it better than the first time, since I knew what to expect and just sat back and enjoyed the story.

Recommended Audience: Older teens, a guy book. There's a bit of language and lots of gore. This is definitely a realistic book so if you're squeamish of blood, don't read it. Also, it really is kind of creepy. If you want something kind of a cross between Louis L'Amour and Supernatural then this is as close as you are going to get!
Posted by Hazel West at 8:48 PM