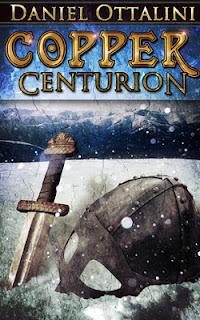 Hi everyone! I'm excited to be hosting a tour stop today for Daniel Ottalini introducing his brand new novel in the Steam Empire Chronicles, Copper Centurion, which was just released on the 1st.

In his Award Winning Debut Novel Brass Legionnaire, author Daniel Ottalini introduced us to the world of Roman Steampunk as Julius Brutus Caesar and his royal commanding officer Constantine Appius fought to save the city of Brittenburg from total devastation. Now, Rome looks to avenge the actions of the Nortlanders and invades the north. But saddled with political oversight, inept leadership and a resourcefully cunning enemy, the expedition walks a fine line between glory and destruction. With their technology failing, it will be down to swords and shields in the next novel of the Steam Empire Chronicles, Copper Centurion.


I've also conducted an interview with one of the characters from the books, Constantine, who is not only next in line for the throne, but a commander in the imperial army.


Salve, Constantine! Glad to have you on my blog today. Tell the readers who might not know you a little about yourself.

Well by day I’m your average Roman Tribune, commanding officer of the 13th cohort, XIII Germania Legion. By night I’m a supremely dashing heir to the throne, but cool in a mysterious way… Hah, I figured that would get you. (Chuckles) Yes to both the tribune part and the heir to the throne part, but I suppose you could get rid of the dashing part.

What has life been like for you since the Battle of Brittenburg?

Well after recovering from my wounds, I was able to rejoin my men. It’s good to be back with them. Lots of new faces coming in though, the cohort really took a beating in Brittenburg. Holding down the governor’s palace for a whole night against a Nortlander backed mob was a pretty bloody affair. And now we’re headed north to give those barbarian scum a lesson they won’t soon forget. (pauses a moment)

That reminds me, I’ll have to pack my cold weather gear. It’s winter time up there eight months of the year, I’ve heard.

What is it like being an heir to the throne and commanding an army at the same time?

By the gods, do you have any clue how many fricking expectations are dumped upon me? Especially since my brother managed to get himself killed last year. Now I get two jobs with just the pay of one. Not that I want that other job yet, mind you. Thank goodness I’m not in charge of the army, managing my cohort is tricky enough. And as far as I’m concerned, I really don’t like to use my imperial authority out here. If I can’t be respected for what I’ve done, then I surely won’t gain respect for shoving an imperial seal in their face

What are your thoughts on airships? Have you gotten to ride in one?

As always, I love riding in airships. Of course, our airships are more like our ‘wet’ navy ships, in that they look similar, just missing the giant balloon! I’ve learned a lot about airships, mostly how to fight on them. And believe me, those things are not as sturdy as they may appear…

Are you more inclined to have faith in powerful machines on the battlefield or the common soldiers?

A machine is just a machine. Without a human behind it, it cannot do anything. The greatest problems to our world come from the mind of man, not the arm of machines. A smart soldier can always outwit a powerful machine.

Can you share a little with readers about what they can expect in Copper Centurion?

Well, as the expedition is currently classified by my superiors, I suppose I can’t really say much, other than to hint that a certain assassin makes an appearance, an unexpected person reappears, and we all freeze our behinds off in the cold lands of Nortland. Then there’s the usual – airship boarding battles, mechaniphants and mechwolves, ambushes, espionage, a traitorous leader and more.

Now for a little gossip. Anything readers should know about you and Senatora Pelia?

No. (Icy stare) My…private…life… is none of your concern. She would be outraged to hear you asking me about it. She is a senator after all. And a shoe-in for the leadership of the new Army Medical Corps, and….

I’ve said too much (blushes).

What do you think the future will bring for you and the others?

Well with the northern front dealt with for the time being, I’m hopeful that we can get some R&R time. We need to refit and retrain some of the new men, and perhaps I can sneak in a trip to the capital. It’s been a while since I’ve been back.

Thanks so much for letting me interview you, Constantine!

The pleasure was all mine, domina.

Brass Legionnaire (Book One)
Daniel Ottalini is a teacher, author, amateur historian who was raised by both the History & Discovery Channel. His parents are very proud of decision to write about alternate history, in hopes that he will stop bothering them about it. His second novel, Copper Centurion, is available in both ebook and print versions. You can learn more about him at www.danielottalini.com or follow him on twitter @dottalini.
Posted by Hazel West at 12:54 AM