Wow, I can't believe it's been twelve weeks since I started Tuesday Snippets! I'm even more surprised that I actually got one up each week :P The only sad thing is that Tuesday Snippets featuring Anthony Maxwell is almost over. Next week will be the last one because A Case of Poisons will be out the next Monday! But once I get through the first draft of my next novel (which I will be talking about after Anthony's release) I will start doing Tuesday Snippets again =)

Since I won't be doing Tuesday Snippets again for a while, I am going to start another weekly serial, because I find I rather enjoy it, and have decided to do Friday Duos, during which I will feature a favorite fictional duo with a short piece on why I love them and likely a little bit of fan art ;) So I'm pretty excited about that.

BUT!! Now it's is time for the Snippet, and this Snippet just happens to be from my favorite part in the book, and I really couldn't resist featuring it as a snippet and drawing the picture to go along with it was really fun too ;)

Without further ado, I present the snippet from chapter 17. (Oh yes, and there are a few extracted parts and bleeps so as not to give away spoilers ;)


I was never sure what exactly started the next few events in motion, but here was my best guess. It is possible that when Tobias and I were rushing to find a hiding spot, we had marginally upset the sarcophagus in the corner we were hiding in, and Tobias was plastered between it and myself, so it’s also possible he shifted slightly and started it moving. The cause didn’t really matter, after all was said and done anyway; only that it happened and set off a whole chain of events that would soon have us running for our lives.
(The Unnamed Gentleman) was still prattling on about (things that don't concern the Reader at this point) and all that, when a slight scraping sounded in Tobias’ direction. I looked over at him with a frown, but saw him doing the same as I but with his eyes locked on the sarcophagus in the corner. And then I realized with sudden horror that it was moving, sliding down the wall slowly toward us. Tobias realized this at the same time I did and put a hand out to stop it, taking a risk by exposing the appendage to the room should they happen to look over, which seemed more and more likely by the minute. One hand proved to be too little for the heavy artefact and Tobias hurriedly flung both hands up as the thing fell with more speed, panic suddenly in his eyes, and I turned just as he was losing it to help prop it up, finally succeeding it stopping its downward motion. We froze in that position, not even breathing, but -------- was still talking and as I peeped out my moth hole again, it seemed, miraculously, that no one had noticed the mummy falling. It was lucky that the room was so dimly lit that the corner we were in was in deep shadow... 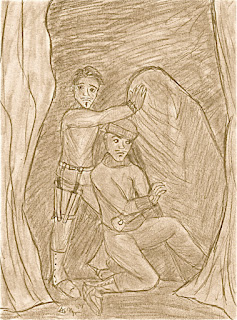 The sarcophagus was now behind the drape with us, so even if it continued to move and someone happened to look over, no one would see it. Tobias and I let out a breath of relief at the same time, and perhaps that extremely slight shift in position caused the next event, for very suddenly the sarcophagus opened and the mummy inside fell out on top of us. Tobs barely bit back a yelp as it fell onto his face. He let go of the sarcophagus in an attempt to hold the mummy and keep it from falling, and I was left with the full weight of the case in my awkward position of reaching over Tobs, and now the mummy’s, heads. I knew this arrangement was not going to last long and I also knew that we had only seconds before someone noticed what was going on despite the dimly lit room and the riveting speech. I hissed into Tobias’ ear, ‘Put the mummy back in the box.’
He didn’t answer and I suddenly realized he was frozen, his eyes clamped shut.


So, if you want to find out how Anthony and Tobias ended up in this very strange circumstance, make sure to save your spangle to buy the book when it comes out June 3rd! Or you can pledge money to my Indiegogo campaign (see below) and get a SIGNED copy =)

If you missed Anthony's interview at my friend Mara's blog last week, go check it out! http://667bakerstreet.blogspot.com/2013/05/character-interview-with-anthony-maxwell.html

And if you enjoyed this snippet, don't forget to help my Indiegogo campaign suceed by pledging money for the release of A Case of Poisons. You can get a signed copy of A Case of Poisons for doing so as well as other awesome perks =)  http://www.indiegogo.com/projects/new-action-packed-steampunk-mystery-series/x/3259500

Slainte, Hazel
Posted by Hazel West at 1:13 AM