Wow, I can't believe there has been 10 Tuesday Snippets! And only a little over three weeks left before the release of "A Case of Poisons"!

Today's snippet is from chapter nine, and reveals what happens to Anthony after the fight he had in the alley with the bruiser and took a wound in the arm from the man's knife. 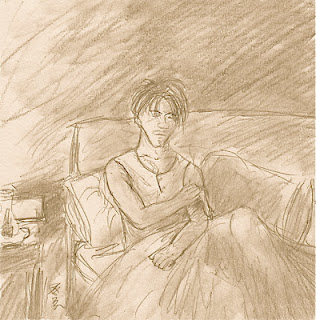 I woke sometime in the early hours of the morning. These hours were not at all strange to me, as I might sometimes work until dawn on a case or one of my personal pursuits, but I always took my eight hours of sleep religiously unless utterly impossible, and rarely woke before they were finished once I did trouble myself to sleep. That night, however, I grew restless and uncomfortably hot where earlier I had remembered being cold. My whole body hurt and yet it was my wound that hurt most of all. I was rather out of my head, but I was lucid enough to realize that I had a fever and knew it must be from my wound. I sat up, fumbling with the gas lamp on my bedside table, and unwrapped the bandage from around my arm. It was bloody from where I had distressed it in my fevered thrashing. Some of the blood had dried, making the wrappings painful to peel off, and when I did I quite wished I had not.
As an investigator I frequently saw dead bodies with horrible wounds, and the ones I had seen several days ago in the morgue at Scotland Yard had had the worst to date, but seeing something that ugly in my own flesh, while I was suffering from a high fever was nearly too much for me.
Mine, to my best recollection and judging from ones I had seen with a clear head later, looked like decaying flesh. It had turned black where it had once been red, and the cut itself was a horrendous, gaping crimson slash through the blackness, blistering at the edges. I could tell at once, despite my somewhat delirious state, that this was not the normal bruising that can occur around an abrasion; no, this was something else. I felt sick with the thought of what that could be.

I personally think the shading turned out better on this picture than the last one (though I'm still trying to get it perfect), and I found out that a que tip makes a better blender than the normal paper things they give you in drawing sets (I lost mine).

Consider it a cliff hanger =)
Also don't forget to stop by the blog on the 10th (this Friday!) for a cover reveal! I'll be doing a giveaway for signed bookmarks with the cover art too, which I should be getting from the printer soon =) I'm very excited to see what you all think of the cover, I think it's lovely and I can't wait to share it with you.
As for the Kickstarter, I've run into unforeseen difficulties, but it's getting there!

Slainte, Hazel
Posted by Hazel West at 1:52 AM