My Campaign for "A Case of Poisons" Finally Up!

Well, if you've been following my blog posts, you'll probably know that I was planning to do a Kickstarter campaign to help support the launch of A Case of Poisons my first Anthony Maxwell book. You might also know that it gave me a lot of trouble. SO I finally ended up ditching Kickstarter and went with Indigogo instead (stupid name, but hey, their site is awesome). In fact, I am almost tempted to tell authors from now on to go with them, but I'm going to write a post about that later. Right now, I want to talk about my own campaign!

You'll be able to learn about all the reasons for my campaign by reading about it on the Indigogo page and watching my video, but in the long and short of it, I'm your typical starving artist, and I have no money in which to promote the way I want to. So, that's where (hopefully) you will all come in to pledge a little money and help me out, so I can make the launch of A Case of Poisons more thorough than I would be able to on my budget which is about as much as your average collage student.

But you're also getting something back for pledging money! Every pledge has a thank you gift (which you'll also be able to read about on the campaign page) these are some of them: 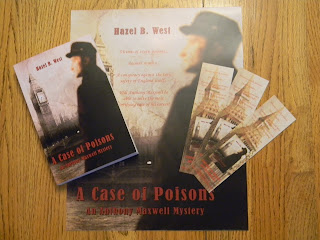 There's also a really fun perk where you get to name a character in the next book. Which is really generous of me, because I'm usually very particular about that ;-) But really, there's a slew of unnamed characters for the next book, so I'm going to need some help.

And now here is a video where I explain about the campaign. I was going to upload it to the Indigogo page, but I made it for Kickstarter and I call it a Kickstarter in the video, so I didn't think that was the best idea, and since I am too lazy to re-edit it because my computer takes forever to render videos, I've decided just to put it here. Mainly I talk about the same things I wrote on the campaign page, but I also read from the first chapter of A Case of Poisons so that means you get to hear my English accent and also my annoying parakeet in the background because that's what I get for filming outside.

(Okay, the video will be up soon, I have to make a smaller file)

Thanks for reading this, and if you watched the video, Kudos to you! I hate self-promotion, so I don't know if I'm doing this right, but I hope you might all consider pledging something. You can check out the link to my campaign page below if you are so inclined to give me some spangle, or if you want to pass on the word, which is great too. Oh, and ignore the part in the video where I talk about the part where you get no money if the goal isn't met, because Indigogo doesn't do that, that was all Kickstarter. I'm also going to apologize to everyone who follows me on my various social media because I'll likely be spamming this everywhere, but that's what they said to do.

Anyway, thanks for your time!