Here's this week's snippet appearing on Wednesday due to my hosting a tour stop yesterday! This is another snippet from Chapter Six since it's also a very cool snippet, and a picture to go along with it.

In other news, I am hoping to get my Kickstarter campaign up within a week. If you don't know what that is, I'll be explaining more later, but I really hope it will go well =)

Here's the snippet for today. In this one, Anthony is looking at the poisons the victims were killed with with Scotland Yard's coroner, Dr Reynolds.

Reynolds fished through some papers and came up with one, which he showed me. ‘The one is the same as the first, but the other two seem to have been poisoned with the venom of black widow spiders and some species of rock fish. There are several variations of the species, but I doubt it will make much difference. I wonder where this villain obtained such exotic venoms?’
‘I have no idea,’ I replied, and I was truly baffled at that time. This was the strangest case I had worked so far in my career both as a private detective and as a consultant for the Yard. Surely it was a very far cry from finding jewellery for upper class Londoners.
‘How about the new body?’ I asked.
‘I was about to look at the blood under the microscope before you arrived,’ Reynolds said.
‘Very well then, let us have a look.’
He fixed the slide and put it under the lens. He looked for several moments, then frowned, adjusted the focus, and looked again. I began to feel impatient, and tried not to lean too far over his shoulder for I knew there was nothing to see.
‘Doctor Reynolds, is something the matter?’ I asked after a while. 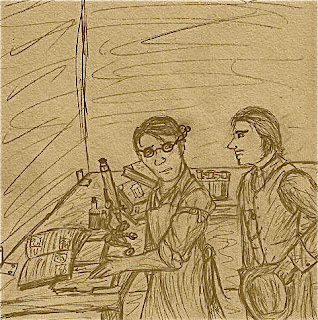 ‘Well, nothing really,’ he replied, puzzled. ‘Only that this one seems different. The make-up of the cells seem…bound. Molecularly. As if they were formed together. Whereas in the other bodies, though the poisons were both obviously in the blood stream, they were each there independently as if given at different times, as they most likely were. This one seems more…well…sophisticated somehow; as if it were manufactured. Do you see what I mean?’
I bent over to have a look for myself and saw that he was right. Even to my amateur eye, I could detect something different about this mixture than the others.
‘What would you say?’ I asked, stepping back again. ‘Recluse and widow?’
Reynolds nodded. ‘Yes, some hybrid mixture of both, to be sure. I think, Anthony, that we are not simply dealing with a sadistic murderer. Sadistic, sure enough, but also a man with a great knowledge of the sciences; frighteningly so. Even I do not know how this was accomplished, and did not even know this knowledge existed; not out of theory, at least.’
‘I have feared it so,’ I told him grimly. ‘There is much about this case I do not yet understand, but I swear that I shall before the end.’
Posted by Hazel West at 1:24 AM