I'll start off the snippet by saying that in exciting news, I have finished the first draft of A Case of Poisons! So I'm right on schedule and should be sticking to the planned release date of June 3rd. So I'll be working pretty much non-stop until then, hammering out the editing and making sure everything flows right.

Today's snippet is from chapter four and introduces Anthony's young urchin friend, Archie (who's also one of my favorite characters ;-) 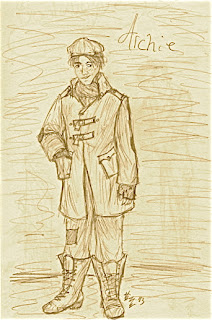 “Hello, Guv,” he called. “Got your message.”
This was my faithful contact, Archie, a lad of about fourteen, and an orphan. Or Prince of Orphans, I should say, for he ran the streets with precision and made sure that the younger children were looked after. He found them places to sleep, food to eat, and kept them away from those who would do them harm. He was a bright lad, seeing everything and missing nothing; I had met him picking my pocket three years before (the Reader might notice that I have met several of my friends this way) and after feeding him a good meal, I employed him and his lads in my best interests, finding out things on the street to help with my investigations. He helped me and I, in turn, turned a blind eye to whatever hustles he and his cohorts ran to earn food and money. Heavens knows the children were doing no harm to anyone, as it was. Just taking a few pence or the occasional watch from the pockets of those who could easily spare several charitable pound to London’s urchins. It was a bit of a personal project of mine to take care of the children who lived on London’s streets, and try to keep them out of harm’s way as much as possible. London is a terrible place for orphans in the times we live in, and they need all the help they can get.
“I was hoping you might be able to help me, Archie,” I told the lad as we set off down to Piccadilly where I planned to take him to Mrs Perryford’s. She too, did all she could to help London’s urchins and they knew they could always find food and shelter with her if the need arose.
“Anything, Tony; what are you working on now?”
So I outlined the case for him and all that we knew up to that point, which was precious little, I found, as I laid it all out for Archie’s benefit. We had reached Anne’s place by then, and were sitting at a corner table, I with my coffee and a sandwich and Archie with a full plate of food which he was wolfing down hungrily. He seemed to look uneasy when I spoke of finding two urchin boys among those murdered and there was a short silence between us when I had finished.
“What I wanted to ask you,” I began again as he took a deep drink of his coffee. “Was whether you knew of anyone who has gone missing?”
Archie shook his head. “Not among my hide, but I was talking to Jims from over in Whitechapel last week and he was telling me several ‘ave gone missing over there. Didn’t think anything of it, though. They always go missing over there. Usually turn up dead or get recruited for the work’ouses. I don’ let that ‘appen to mine.” He seemed angry and I couldn’t blame him. It made me sick to think that someone could be so cruel to children even if they didn’t have a family who would care if they went missing or not. But that was the way it was; everyone thought the street rabble were expendable and little better than animals.
“Let me know if you see anyone strange, will you, Archie?” I told him.
He nodded. “Oh, I will be sure to, Tony,” here he leaned across the table and there was a serious look on his thin, freckled face. “You find the bludger who’s doin’ this, and I’ll do him down right good.”

Also don't forget to check out the whole first chapter and let me know what you think by leaving feedback here.

And if you get bored waiting for the next snippet, check out my old/new serial "Much Ado About Everything"

Slainte, Hazel
Posted by Hazel West at 11:04 AM