Yay! the third consecutive week of Tuesday Snippets with a picture as well! I'm very proud of myself ;-) I hope everyone has been enjoying them!

Today's snippet comes from chapter three where Anthony is back home after examining the bodies they found in a deserted graveyard, researching into the cause of death, that can only be poison:

I had a feeling that the numbers and letters marked onto the victims had something to do with how they died, but I had no idea of how to start with that, so I had to look at a different angle. Both Dr Reynolds and myself had figured the most likely cause of death had been poison or acid of some kind. But of what nature, who could tell? For poison was one of those things. It could be anything. Thus I knew I had a lot of work ahead of me. It was time to put on the coffee.
I worked for hours, and by the time Tobias stopped by to see what I had found out, I was kneeling on the floor of my study in my shirtsleeves, my hair frazzled, a pencil behind my ear and a plethora of books stacked and open all around me. Tobs stepped gingerly over some of them and leapt over another pile before he found a relatively clear spot where he could stand and look down at me.
“Well?” he asked.
“I do believe I have some answers, my dear fellow,” I told him, frantically digging through my organized disaster to the sheet of notes I had been taking down, and tapping the page of one of the books laid out in front of me. “I have found, without a doubt, that they were poisoned, but with several different venoms; at least that is what I have concluded from reading about symptoms. Which is a very hard task, Tobias, for it is quite like eating the finished cake before one bakes it.”
“I can imagine is it,” Tobs said.
“But I do think I have got the initial idea down. The poisons were all organic—from animals of some sort; I will, of course have to check back with Reynolds at the Yard to see if he has found anything in his tests.”
“But if that was the case, Tony, then what possibly could have happened to those poor souls?”
“I shudder at the thought,” I told him, and indeed I did, for while researching, I had begun to

have a terrible feeling about where this case might lead us, though, I’ll assure you, my dear Readers,

that whatever I thought then was nothing compared to the actual events of said case. 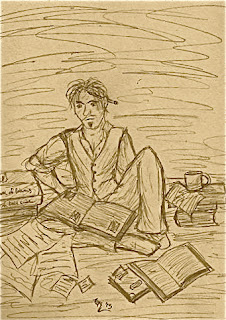 Come back next tuesday for another teaser! And don't forget to add A Case of Poisons to your shelves on Goodreads!