As promised, here is another snippet from A Case of Poisons, and to go a long with it, a sketch I did of Tobias and Scamp, who are Anthony's best friends and partners. 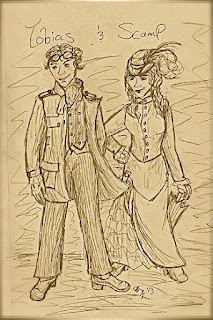 Today's snippet comes from chapter two: Anthony and Tobias have just gone to pick up Scamp and are heading out to the scene where the first body was found earlier that morning:

We finished our breakfast—yes, it was my second but I was on a case!—and returned to Tobias’ contraption. The two of us got in the front while Scamp took the trundle seat in the back. Once we were moving in the familiar jerky motion of the vehicle, she leaned forward between us, and turned to look me in the eye.
“So, Tony, what is this case that is so important or baffling that Garrett must needs get you out of bed before dawn?” she asked.
“It is quite baffling,” I told her seriously. “The body was covered in wounds, the likes of which I have never seen before. It looked almost as if something ate away the flesh.”
“Sounds unsavoury,” Scamp commented in her usual brisk manor. “How do you think he came by them?”
“Tobs found what looked to be a syringe mark in his neck; my best guess would be some sort of poison, though what exactly, will take me and Reynolds a bit to figure out. He also had signs of restraint on his wrists and ankles and a mark on his arm that read ‘23LRHS’. Does it mean anything to you?”
“Not a bit. Do you think it was murder?”
“The man was killed purposefully for sure,” I said. “Though whether it was murder or some sort of torture, I’m not yet certain. All I know is the man was bad off, and I think he suffered a great bit before he died. Those wounds looked bloody painful.”
“Where was he found?” Scamp asked.
“He was found by a man coming into town. We’re paying him a visit to see what he has to say before we look at the lay of the land. I’m hoping he can take us to the exact spot he found the body. We might be able to find some more clues there.”

Also, you can now read the entire first chapter on Createspace, and if you could leave some feedback as well, that would make Anthony and I very happy =) https://www.createspace.com/pub/community/give.review.do?id=1121106&rewrite=true

Until next week!
Slainte, Hazel
Posted by Hazel West at 12:16 PM