All right everyone, so to get people excited about my upcoming novel that should be released this June, the first in a mystery series featuring detective Anthony Maxwell, I am going to post a snippet from each chapter in numerical order every tuesday until it is released! Some days (like today) I might even have sketches to go a long with them.


I looked at the letter for the first time then, seeing that it was from my dear friend at Scotland Yard, Inspector Garrett. I use the term ‘dear friend’ lightly for, in truth, I thought the man totally incompetent and tiresome; his continuous pleas for help only added to my opinion.
The message read as such:

Maxwell, a body has just come to us which seems to have met a most peculiar end. I believe your expertise is needed on this case. Come at your earliest convenience.

Which was to mean ‘at this very moment’ of course. Inspector Garrett would think a body met a peculiar end if a man shot himself right in front of him. But working with the Yard paid the majority of my rent cost, and I’ll admit the thrill of solving mysteries was sometimes reward enough. I only hoped this one would be a real challenge and not just another obvious suicide case like the last one. If only I had known then what I was getting myself into before I stepped out the door that morning to embark upon my newest venture. But, in all honesty, I suppose, even if I had, I would have done it all the same. 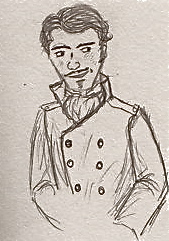 I'm also excited to say that you can now add A Case of Poisons to your to-read shelf on Goodreads. If you liked this, come back next tuesday for another snippet!
Posted by Hazel West at 11:57 AM