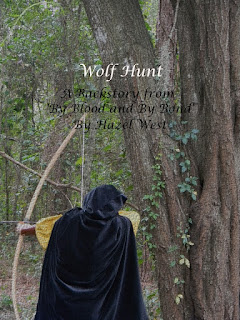 Well, I have FINALLY gotten my second backstory for "By Blood and By Bond" up and published!! This was almost more annoying than my first e-book! Still not too happy with the cover, but it will do for now.

Anyway, this is the backstory for my Celtic character, Caolan. Chronologically, it's actually the third in my trilogy of backstories, but it was the second one I wrote, so I'm publishing it next. For those of you who have not yet read "To Save a Life" you can read this one without having read it, but I highly recommend you do before my third story is out as that is another one that will feature Viggo and should be out by next month!

Also, if you don't know, the first two chapters of "By Blood and By Bond" are up on Goodreads for you to read, if you so wish.

Caolan is the son of a Celtic chieftain in ancient Britain, a warrior and a great hunter. One day, he gets the feeling that someone is watching him from the woods while he hunts and that night he dreams that his best friend and foster brother, Faelan, is killed by a wolf. He can't shake the feeling that his dream might be a vision, knowing his mother possessed the Second Sight, and when wolf attacks begin happening around the village, he worries that Faelan's life might be in danger. As a wolf hunt is organized, and Faelan insists on going, Caolan must decide whether to follow his gut feeling or push it aside as superstition and coincidence. This is the second short story published in a series of backstories featuring the main characters for Hazel West's upcoming novel "By Blood and By Bond".

It was a strange dream that came to him that night. He was stalking something in the woods as he usually did, but there was some other feeling this time. Not the anticipation and calmness that came over him when he hunted, but an urgency born of fear that seemed unable to let him go. He looked down at his hands on his bow and they shook slightly as if he were anxious. Caolán looked around, wondering what he was after--or what was after him. He had that feeling between his shoulder blades again that someone was watching him, but he could not see it for all he tried.
Suddenly, a cry of fear and a low growl sounded out nearby and he was spurred into action to run toward the sound, bursting out of the trees to a place backed against a rocky outcropping that he knew well, for it was right near the river he often hunted by and where he and the other boys climbed on the rocks to jump into the river in the summertime. But now he saw two figures up against it. One was Fáelan, his back pressed against the rock, one of his arms bloody and held close to his body as if injured, his eyes wide with horror as he stared at what was in front of him. Caolán saw it too then. It was a wolf, a huge wolf, its teeth bared in a snarl as it crouched low, growling at Fáelan and readying for the fatal leap, meaning to rip the young man’s throat out. Caolán cried out and surged forward, raising the bow to shoot, but at the same time the wolf made its move and leapt toward Fáelan, who could only throw up an arm to protect himself…

If you like the sound of that, do purchase a copy of "Wolf Hunt"! It's currently on Smashwords, but it should be on Amazon Kindle as well by friday hopefully. I'm uploading it tonight and it always takes them at least 24 hours to get all the files together. Once I publish all three stories, I will be putting out a paperback anthology of them, so if you're a page-flipper, just wait another month or so, and I promise it will be out at least by Christmas =)

Also, if you don't know, I have started a Twitter account @artfulscribbler so you can now follow me to see all my updates on writing and my blog and also if I have any fun links to share.

If you enjoy this story, don't forget to adopt my "Brothers in Arms" button over on the right --> that was inspired by Caolan and Faelan. And I also have a small favor to ask. If you purchase my story from Smashwords, if you feel inclined to write a review for it, I would be very happy since I have not gotten a review on Smashwords yet.

That's all for now!

Email ThisBlogThis!Share to TwitterShare to FacebookShare to Pinterest
Labels: book covers, By Blood and By Bond, Caolan, Celts, ebooks, excerpts, historical fiction, my writing, October, Roman, To Save a Life, Viggo