Cover Reveal for "On a Foreign Field"!

Well, I just finished up the cover art for On a Foreign Field and put it into Createspace and I think it looks quite nice ;) Here it is: 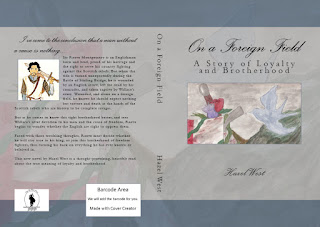 And here's the teaser on the back:


Sir Reeve Montgomery is an Englishman born and bred, proud of his heritage and the right to serve his country fighting against the Scottish rebels. But when the tide is turned unexpectedly during the Battle of Stirling Bridge, he is wounded by an English arrow, left for dead by his comrades, and taken captive by Wallace's army.  Wounded, and alone on a foreign field, he knows he should expect nothing but torture and death at the hands of the Scottish rebels who are known to be complete savages.
But as he comes to know this tight brotherhood better, and sees Wallace's utter devotion to his men and the cause of freedom, Reeve begins to wonder whether the English are right to oppress them.
Faced with these troubling thoughts, Reeve must decide whether he will stay true to his king, or join this brotherhood of freedom fighters, thus turning his back on everything he has ever known or believed in.
This new novel by Hazel West is a thought-provoking, heartfelt read about the true meaning of loyalty and brotherhood.

Now all I have to do is wait for Createspace to approve my files and I'll be able to order my proof copy! (I might even take a picture of it when I get it ;)

For something fun to celebrate getting all the formatting and the cover done, I want to share with you one of my favorite songs and one that really inspired this story: Brothers in Arms, sung by Celtic Thunder Sorry it's not the best quality, but it was the only video I could find on Youtube.

I'll be back to talk more about my new book this month while I'm working on doing the final edit and waiting for my proof copy to get here, so if you're interested, please check back frequently!!