Romance Vs. Bromance: How to avoid Awkward Moments between the Boys by choosing the Right Words

Yes, everyone, I did just use the modern vernacular "Bromance" (it's as close a word as people get to brotherly love anymore) this is a humor blog, and though I told myself I wouldn't use it, I found I couldn't help myself. (Sometimes, if you can't beat 'em, join 'em.)

So anyway, this post is about something I have been thinking of in the latest book I'm writing, "On a Foreign Field", because it has a strong sense of platonic brotherly love. More and more I see these themes getting axed, and I think it's because authors are afraid to add stuff like their guy characters hugging each other or whatever without having them being thought unmanly. This is bloody wrong, and here's why: When writing themes such as warfare and hard times, men form bonds that women just can't understand. Trail dust in thicker than blood, as Louis L'Amour would write, and trial by fire breeds a connection between comrades that only comes from sharing the same horrors they must face on the field. That's why I totally support physical brotherly love, and I have some tips here today that I hope will help people who feel the same as me! By all means, let your guys hug it out, let them comfort each other when their lasses aren't around to do that, or they just don't understand what's wrong with their lad. Here's how you can do it while avoiding awkward situations:

It really all comes down to how you word things. For one, guys do NOT "stroke" each other. Never EVER use this word when speaking of two guys. They slap each other or give each other a small affectionate punch. This is the equivalent between guys as a sister giving her brother a little kiss on the cheek. Guys don't punch each other to hurt each other: ladies, if you have brothers, you probably know this. A guy's form of affection is hitting his friend in the ribs instead of the face so he won't ruin his date with his girlfriend ;-). When guys really want to hurt each other, then they kick their opponent in the crotch.

Now, when hugging, guys "clasp" each other in a "rough/strong embrace". (Add some backslapping too when they're doing it happily). When they're doing it for comfort same words apply, but you can make it as gentle as you wish. In contrast, men "draw their women closer to them". See the difference?

And yes, your guys CAN kiss each other--on the forehead. I would just reserve it for when someone is dying ;)

If you want some great examples of authors who write good brotherly scenes you can read...My stories! Or you should read Rosemary Sutcliff. Her style of writing is something beautiful and you just can't find anything like it any more.

So I hope these tips will help you people like me who support brotherly love. My best advice is write what you want and don't worry about what people will think and if they call you on it, just get the pitch forks. And if you feel awkward about scenes you might have written like this, than just look over the wording in them as opposed to any romance scenes you might have written and fix any similarities. Your lads will thank you for it in the end, trust me! 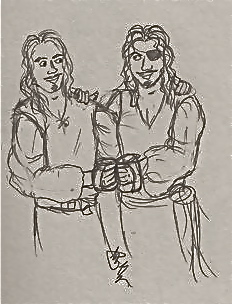 Also, go and read my interview with Daniel Ottalini on his blog here!