Hi everyone! I like to try and commemorate the birthdays of some of my favorite historical figures, and since now I have a blog that is not specifically Scottish, I'm going to write a short happy birthday to that famous flying ace, Manfred von Richthofen, also known as the Red Baron.

Despite popular beliefs, Manfred was hardly the villain. In fact, most of the pilots in WWI used quite a few rules of chivalry when fighting, one of the reasons they were called "knights of the air". One of the things they did a lot of times was the opposite side would drop a wreath over the grave of an honorable enemy. There were a lot of unspoken rules in air combat that made it far more honorable than fighting in the trenches where men just killed to survive. Manfred did have 80 kills under his belt, a number way over the top of any of the other aces in this war and even WWII. Manfred von Richthofen was actually a very mild tempered individual, and he's a national hero in Germany. 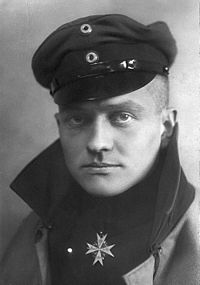 I think I kind of fell in love with his story when I read Jeff Shaara's amazing novel To the Last Man. (This book can be found in my Amazon Astore in my links) If you like the WWI time period, you must read this book. I loved it because it follows the lives of four different real people in the war, including Manfred, and Raoul Lufbury who was a French/American pilot flying in the Lafayette Escadrille. The way Shaara portrays Manfred is so wonderful, and very true to history as well. There are several good biographies as well, one written by Peter Kilduff which helped me a lot with research.

I think it's important that we honor heroes and good men, no matter what side of a war they fought on. In my opinion, Manfred von Richthofen was a good man and an honorable fighter and he deserves to be honored like any other hero.

So let's all say happy birthday to Manfred today! I'm going to make German strudels to celebrate and embrace the German part of my heritage.

I'll be back within the next couple days with two WWI movie reviews, so check back soon!