Okay, so I didn't get as many blog posts written this month as I wanted to, mainly because I started a new writing project and kind of obsessed over it and fell in love with all the characters, and decided to spend all the time I had before NaNo writing a bit of that story. So, yes, that's what happened, and I can't talk about that particular WIP at the moment because I'm a secretive writer, but I really CANNOT WAIT to share it with you all because I think it's totally awesome and I've been having a blast with it. However, next week you are all going to get a sneak peak into my NaNo project for this year, and it will finally be revealed to the public. My crazy idea, I can't wait to see what everyone thinks =) And all through the month of November, I'll be posting fun stuff to go along with my story, an excerpt each week, and also just NaNoWriMo stuff in particular. If you're doing NaNo too, let me know, and we can be NaNo Buddies =)

All right then, so today was pretty awesome, because it's finally gotten cold here in Florida. (Relatively. Cold enough to wear an over-shirt, anyway.) So, because that put me in such a good mood, I wanted to share an excerpt of my upcoming novel Michael Crandon: A Company of Rogues. My new mystery novel about a retired jewel thief living in the 1930s. (If you missed the introductory post about Michael and co., look here). And because I'm a mean author, I decided to share the bit where Michael gets accosted and beat up by one of his nemeses. So, I hope you enjoy that.

I hadn’t gone more than ten metres from the pub beforesomeone stepped out of the shadows on my right, revealing himself in the glow of a street light. I stopped, cursing violently. If it hadn’t been so wet, I would have been warned by the acrid smell of the cigarette the man was smoking, but as it was, I had been caught off my guard, and by the second worst possible person. The only thing I could thank Lady Luck for at that moment was that it was not Randall; though I didn’t really care right then, for I knew the result of the meeting would likely be about the same when all was said and done.
“Ah, Crandon,” he said with a sneer I hated so much on his face. “I’ve been wanting to talk to you. Have a few questions, I do.” 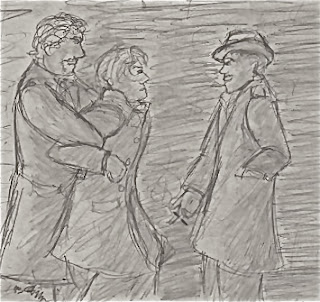 This was the infamous Inspector Dowd, the man who had had it in for me since the first heist. I had never figured out what had led him onto my trail or how he had even found me for that matter—perhaps it had been Randall’s doing—but he had never forgotten and he enjoyed tormenting me whenever a chance arose. It was lucky there had never been evidence found against me despite his desperate searching, or I would have been behind bars long ago, or worse. And as Dowd was a very sadistic minded man, I didn’t want to think about what the worse might entail.
“I don’t have time for you tonight, Dowd,” I told him, trying to dodge to the side, but he stopped me with a hand on my chest, glancing over my shoulder with a smile. I didn’t bother looking; I already knew who would be there.
“Hello, Braxton, Howard,” I greeted Dowd’s two bruisers who had marched forward to box me in. Dowd turned back to me with an oily smile on his face.
“Let’s go somewhere a little more private, shall we?” he inquired, motioning to an alley to the left and his lackeys put their huge paws on my back and shoved me along until we were out of sight of the street. The light only shone enough to see the vague outlines of my accosters, and Dowd’s face glowed eerily from the light of his cigarette whenever he took a puff of it.
“Now Crandon, you should know how this goes by now. You answer my questions and I let you go on your way. If you don’t, I’ll have Braxton and Howard give you a little something to consider for the next time we meet. I do hope you didn’t forget your last lesson so soon. But it has been a while, I suppose; perhaps it’s time to refresh your memory.” He knocked the hat from my head and it landed in a puddle on one side. I cringed as he breathed smoke right into my face. “What’s it going to be?”
“Tell me what you want to know before I decide,” I told him.
“I think you know,” he said then grabbed me harshly by the lapel of my jacket and dragged me toward him so that his face was uncourteously close to mine. “Where is the necklace, you scum?”
I shoved him away, twisting my lip as I tried not to breathe in his awful breath; I caught the scent of liquor as well, only adding to my sinking feelings. “I don’t have the bloody thing, as I have explained to everyone else. Now get out of my face and let me be!”
He didn’t like that at all, sneering at me with a wicked gleam in his eyes. “You’ll pay for your contemptible attitude, Crandon,” he said before he shot his head forward into mine. There was a metallic taste in the back of my throat and I felt blood drip down my chin from my nose. Before I could recover, Braxton and Howard had taken me between them, and there was no chance I was going to get away now. Dowd grabbed one of my hands and put his cigarette out in my palm. I gritted my teeth as it burned me, but I knew better than to show him any reaction. It only egged him on all the more.
“Perhaps next time you won’t defy me,” he said with a weary sigh and motioned lazily to the bruisers. “Teach him his lesson, boys.”
Posted by Hazel West at 8:46 PM