The 11th Tuesday Snippet! This one comes from chapter 12 because the previous two chapters didn't have an interesting snippet that wouldn't be a spoiler =) This one is very cliff-hangery though, (which all the snippets will be until the release of the book--that's my plan for getting people to buy it when it comes out *evil laugh*). So hope you like it and the picture of the cute little urchin boys =)

I was woken that morning earlier than expected, hearing first the pounding on my door and then Mrs Hutchings hurrying toward it. I wanted nothing more than to stay curled on my sofa and die, but knew I could not ignore the commotion. I was just hauling myself off the sofa, thankfully still wearing my dressing gown, when a flurry of voices could be heard, along with Mrs Hutchings sounding exasperated and flighty.
‘Mr Maxwell, come make sense of this!’ she cried.
I did just that, or at least, that was my intention, but as soon as I stepped out the door of the parlour, I was accosted by two small, filthy figures that were trying with every ounce of being to drag me out the door. 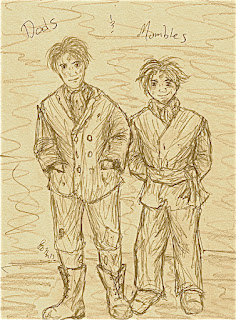 ‘What is going on?’ I demanded, trying to shake the muzzy sleep from my head, and that at least stopped them for a minute.
One of the boys, Dods, I realized now that he was no longer yanking my arm from its socket, spoke first, looking pale and frightened. ‘Tony, you have to come now! Those kidsmen have blagged Archie! We was just out hustlin’ and they came out of nowhere!’
‘Who?’ I asked, trying to make sense of it all.
‘Some toff and two bruisers,’ said the second boy, Mumbles. ‘Archie fought them, and tol’ us to run.’
‘We didn’t wanna!’ Dods put in sternly.
‘But we did, ‘cause Archie said so, but we stayed by and watched, and he held his own for a while, but then the bruisers grabbed ‘im and the toff put a billy over his face and ‘e seemed to pass right out.’
It took me a moment to put their hectic story together, but when I did, I sped off to my room, calling for Mrs Hutchings to quickly send a message to Tobs to tell him to meet me here. I roughly threw on my clothes, ignoring the smarting in my wounded arm and then went to open the door to my room again. But I stopped, leaning against it as I finally realized just what had happened. Archie…

Also, if you missed the cover reveal, go check it out here and see the lovely cover art by Jessica Gilliland!

Also, another fun thing for the day: my Friend Mara interviewed Anthony Maxwell on her blog, so do check that out too so you can find out more about the hero of A Case of Poisons.

And don't forget, if you liked this and want to help me out with promotion for the release of A Case of Poisons check out my Indiegogo campaign. Remember, there's lots of awesome perks for incentive!