Well everyone, I'm both sad, and excited to announce that this is the last Tuesday Snippet that will feature Anthony. But only because next Monday is the release of the novel! And then you won't have any reason for Tuesday Snippets, you can buy the novel and read it for yourself in it's entirety =D Which, I'm pretty sure is better, but you can tell me what you think about that.

As far as the release goes, I'm going to be having a release party here on June 3rd when it comes out. I'll be doing a character interview with Scamp and Tobias, and putting up 'behind the scenes' stuff about A Case of Poisons. Mara will also be posting a release announcement on her blog as well with an except that I will direct you to from my post. There will also be a giveaway for a free e-book and another for a poster and bookmarks featuring the cover art. There might also be more things but so far, that's classified. (AKA, I don't know if I'll get what I want to done by then).

And so, without further ado, here is the final Tuesday Snippet, and truthfully the last one I can share without giving away too much. Hopefully it's also enough of a cliff hanger to maybe make you want to buy the book when it comes out ;-) 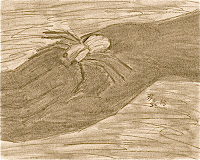 If I hadn’t panicked before while they were chaining me to the table, I was certainly panicking now, and I don’t think I have ever been more scared. I regret to say, dear Reader, that by that time, I had lost all the bravado I had once possessed. All I could think about was the knife wound I had received with the spider venom in it and how I did not want to endure that again, especially on a large scale. He tore my shirt open and brought over the case full of the bloody creatures. I tried to force myself to think of the fact that I was an Englishman and that Englishmen do not show fear when they are tortured, but then who was I to say? I had never known anyone who had been tortured, and surely the rack or the thumbscrews or anything the Inquisitors came up with was better than this. But most of all, I realized right then for the first time, dear Reader, that I was, regrettably, deathly afraid of spiders.

Also, I'm running a giveaway on Goodreads now for two signed paperback copies of A Case of Poisons until the 10th! So enter below:

A Case of Poisons

See the giveaway details at Goodreads.

Don't forget to come back on June 3rd for the release party!!!!
And also don't forget to check out (and hopefully donate) to my Indiegogo campaign to help me promote Anthony even better!  http://www.indiegogo.com/projects/new-action-packed-steampunk-mystery-series/x/3259500

Until then,
Slainte, Hazel
Posted by Hazel West at 12:57 AM