Yay, for another Tuesday Snippet! This one is actually one of my favorites so far, personally. I'd also like to report good progress on the editing stage on A Case of Poisons, I am very nearly ready to start formatting and that means I am almost ready to send off for my proof copy! I just have a little more fixing to do. Apart from that, I am DEFINITELY getting my Kickstarter up by this weekend. I made my video and figured out the prizes and all that, so it will not be long now! Also, I'm hoping to have the cover reveal up sometime within the next couple weeks or so, so keep an eye out for that!

And now onto the snippet! This one comes from Chapter Eight and  takes place when Anthony, Scamp and Tobias go out searching for clues in the slums at night and come across some really nasty guys who, oddly, don't feel pain.


As I skidded to a halt, ready to make my stand, I spun around, expecting the man to be right on top of me, but he was nowhere to be seen. The single lamp did little to assure me, but there was enough light to tell that there was no other human beside myself back there, nor did I hear the pounding footsteps that had pursued me. I took a moment to catch my breath as I searched for a sign of where my rather large ne’er-do-well could possible have gotten.
‘’Ello, Guv,’ came a voice from right behind me and I spun to see the man. How he ended up at my front had me flummoxed, but I turned around to meet him, wary, and ready to pull out my shortsticks should the need arise.
‘Hello yourself,’ I replied cheerily. ‘It’s a bad night to be out.’ 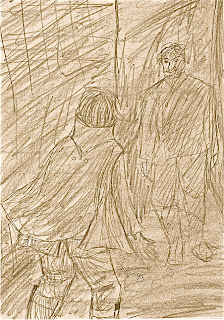 ‘‘Specially for yuh, Guv,’ (intentional bad grammar/spelling--for accent) the man said. His breath was heavy and rasped strangely in his chest, but not in the way mine was from the run. It was wolfish, and the too-bright gleam in his eyes made him look a predator. Despite his hard breathing, he didn’t seem spent at all. I stopped thinking about his resilience and concentrated on his right hand. He curled his last two fingers over and pressed into the palm of his glove. There was a short click and something flashed out of his hand. I realized that he was wearing an eagle’s claw—a device that could be buckled onto a glove and had a curved, flip-out blade activated by a spring mechanism—and also that I needed to act fast if I didn’t want to have it stuck into me.
I know I mentioned my custom-made boots before, but I would like to remind the Reader of them as I don’t think I revealed all their secrets yet. You see, they were crafted by a very canny Scotsman, and I believe I already said that they held hidden sheathes where I kept my shortsticks. But there was also another secret to the sheathes, and that was in a mechanism attached to the heels. If I clicked them together, it would pop and cause the sticks to spring up so that I could grab them on a moment’s notice. Tonight, however, was the first time they failed me, for the mechanism must have been clogged with the mud and I looked a proper fool clicking my heels when nothing happened. The huge man, who was to be my opponent, laughed at me.
‘Those h’are some fancy gallies (boots, in Victorian slang) yuh ‘ave there, (intentional bad grammar)’ he said with a wolfish grin on his face. ‘h’I might take those once I kill yuh.’
‘Shame they’re not really your size,’ I replied and clicked again, this time hearing the satisfying whirr of the gears before the sticks popped up and I grabbed them with lightning quickness. It was a good thing I did too, for, at just that moment, the man charged me and took a huge swipe with the small, curved blade of his eagle’s claw.

Hope you liked the snippet and the picture! As you have probably noticed, I draw people better than inanimate objects and scenery, so I hope you can tell it's an alleyway in the picture. Also, this was one of those that looked much better before I scanned it into the computer. It's actually the first nighttime picture I have drawn so the shading is iffy but in real life, I was actually able to make it look like there was mist floating around--not so after I scanned it, but oh well. Likewise the baddie didn't look so flat either.

I'm hoping to write some more posts soon, later this week we'll be having a tour stop with another steampunk author, Daniel Ottalini about his new book, so check back for that!

Slainte, Hazel
Posted by Hazel West at 11:38 AM